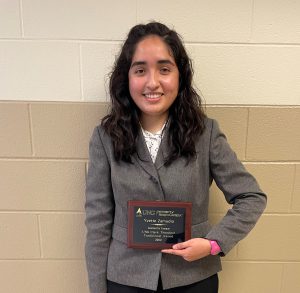 On April 13, 2022 the University of North Georgia presented political science major Yvette Zamudio with the Clark Theodore Traditional Student Award at the annual Student Honors and Awards Day on the Gainesville campus. This honor is bestowed upon students who demonstrate excellence in academics, leadership, and service. This is not the first time that Yvette has been recognized for her hard work and determination. She was awarded a scholarship through her participation in the Nesbitt Leadership Program during her freshman year at UNG. She has also been named to the President’s Honor Roll, President’s List, and Dean’s List.

Yvette is a junior studying on UNG’s Gainesville campus where she has been very active in both academic and extracurricular activities. In addition to the Nesbitt Leadership Program, she also joined the Tri-Alpha honor society which focuses on first-generation students. At the end of her sophomore year, she became a nighthawk navigator which is an on-campus peer coaching job. She enjoys this position because she helps incoming students learn about the various resources available to them.

Yvette had a transformative experience when she took a Model UN Class during her junior year. Through this class she attended the Southern Regional Model United Nations (SRMUN) conference in Atlanta where her team was collectively recognized for their outstanding position paper at the closing ceremony. She states, “Looking back at the conference, I see that from this experience I have been able to get a better understanding of the vitality of having multiple perspectives on an issue and how this often leads to finding better solutions to these issues.”

Yvette was nominated for the Clark Theodore Award by Dr. Bibek Chand. He states, “I nominated Yvette for the Clark Theodore Traditional Student Award because of her unwavering dedication to her work and active participation in the university community.” He continues by stating that in addition to attending the Model UN (SRMUN) in Atlanta, Yvette is a founding executive member of the Model UN Club on the Gainesville Campus. He concludes, “I am very happy that she received the award and cannot wait to see where her future vocational endeavors take her.”

Yvette states that she plans to continue her education by attending law school with the goal of becoming an immigration attorney. She states, “Because both of my parents immigrated to the US, I have been able to see firsthand the current shortage of Spanish-speaking immigration attorneys and believe that I can help remedy this.”