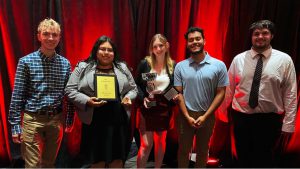 [Note: This article is a modified version of an article from the UNG Newsroom that originally appeared in Apr 2022. https://ung.edu/news/articles/2022/04/debate-team-excels-at-competitions.php]

Two UNG PSIA seniors majoring in pre-Law, Taylor Mullikin and Sam Church, are part of the UNG Debate Team that proved to be a formidable force at the Pi Kappa Delta National Conference held March 10-12 at the University of Central Florida. The team won an award for small school sweepstakes which is given to the school with fewer than 25 entries that wins the most awards. Mullikin received an excellent award in impromptu and extemporaneous with a superior award in broadcast journalism at this conference.

In addition to excelling at the Pi Kappa Delta National Conference, the UNG Debate Team was granted the following honors this year: the service-learning award from Emory University, the Pentathlon award at the Georgia International Forensics Association (GIFA), and most improved club at the UNG Blue and Gold Awards.

At the Blue and Gold Awards, UNG also honored Taylor Mullikin as the Student of the Year for being President of the UNG Debate Team and coordinator of every event held this year as well as for receiving the most awards on the team.

Reflecting on his time with the Club, Sam Church states, “Being on the debate team has been great to prepare me for the real world. It is not only about improving public speaking, but also improving overall confidence. Winning the award was a team effort!”