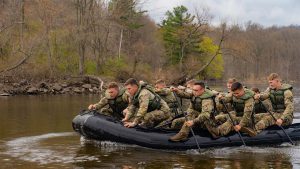 [Note: Portions of this article first appeared in an article from the UNG Newsroom that originally appeared in May 2022. [https://ung.edu/news/articles/2022/05/cadets-win-rotc-title-at-sandhurst.php ]

Coming to UNG from Pickering H.S. in Leesville, LA, Zane is entering his final year as a political science major. Asked about his experience at Ranger Challenge ‘22 Zane says, “The competition wasn’t easy, but it is manageable when you have good people around you. UNG does well in this competition because we have a good culture and better training than most other ROTC programs.”

“The preparation, sacrifice and dedication of this team are inspiring. They enter each competition knowing every other ROTC team is out to take their spot, and the academies know that we are consistently within striking distance,” Kirk said. “The mental and physical strength of this team is clear in their consistent ability to compete at the highest levels.”

Zane is already looking forward to next year’s competition — “I look forward to going back next year and getting another shot at beating all the teams at Sandhurst.”