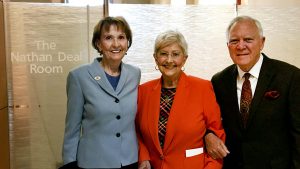 [Note: Portions of this article first appeared in a UNG Newsroom an article that originally appeared in May 2022. [https://ung.edu/news/articles/2022/05/classroom-named-for-former-gov.-nathan-deal.php]

Former Georgia Governor Nathan Deal’s three-year term as a Regents Professor, as well as his contributions to the University of North Georgia and the State of Georgia, were recognized by UNG President Bonita Jacobs during a ceremony on April 28, 2022 where a classroom in Young Hall was named in Governor Deal’s honor. 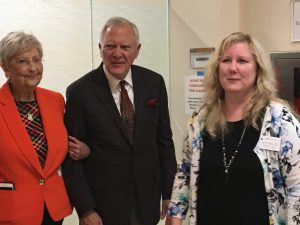 Department Head and Professor of Political Science & International Affairs Dr. Dlynn Armstrong-Williams remarked, “In addition to teaching ‘Politics in the Peach State’ to UNG students over the past three years, Gov. Deal contributed to the fourth edition of “The Basics of American Government,” a textbook written by UNG faculty and used widely throughout the state. He provided a unique view of politics both within Georgia and the nation as a UNG professor.” Dr Williams continues, “Beyond describing his own time in elected office at the state and national levels, Gov. Deal was able to bring PSIA students face-to-face with many individuals who have dedicated their lives to the service of their community and the state of Georgia.  I am sure that his classes will remain a highlight of their college experience.”

In 2016, Mary Catherine Olive, who was then a junior political science major concentrating in American politics at UNG, had the honor and privilege of serving as an intern in Governor Deal’s office.  You can read a PSIA blog story about that internship here.