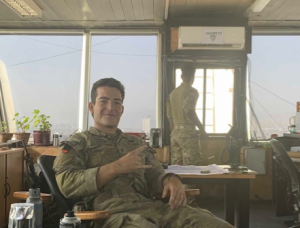 We were able to catch up recently with Dylan Martin, of Gainesville, GA, a 1st Lieutenant in the U.S. Army. Dylan graduated from UNG in 2018 with a Bachelor of Arts in International Affairs, with a Middle East concentration. Dylan then commissioned into the Army that same year, and is currently living in Fort Bragg, NC as a member of the 82nd Airborne Division. Dylan spent a couple of months during the summer of 2021 at a unique duty location with the U.S. Army and told us about his experience.

“On August 17th, 2021, my unit was activated and we were directed to the Hamid Karzai International Airport in Kabul, Afghanistan, where we proceeded with the evacuation,” Dylan said. “It ended up being 130,000 American citizens, Afghan military and international refugees.”

Dylan described the feeling of that task as being an “absolutely wild experience.” “I was very blessed to have been able to participate in that moment in history,” said Dylan. “In that particular deployment, what struck me was the humanity of everyone involved, everyone coming together in order to achieve our goal.”

We asked Dylan if his time at UNG and in the International Affairs program had an impact on or contributed to his days in Kabul. “The two most important things from my time in the IA program that helped me was the study abroad and international internship,” Dylan said. Dylan studied abroad in Fez, Morocco, and was immersed in the Arabic culture and language. He also had an internship in Atlanta with the Arabic Language Institute Foundation (ALIF) where he primarily assisted with the relocation of Syrian refugees to the U.S. while simultaneously protecting their culture.

“Those two experiences placed a high value on a culture other than my own,” described Dylan. “It’s something that was incredibly instrumental in my ability to place an incredibly high value on the people that were evacuating.”