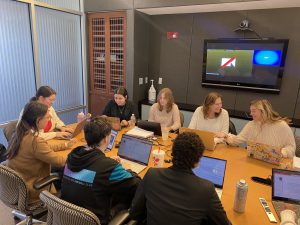 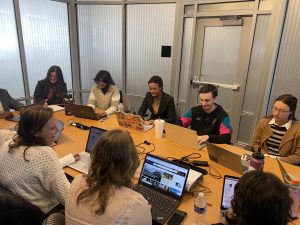 This year’s event was held in collaboration with NATO and was designed to emulate a NATO  planning session. It brought together teams from over 60 universities from across the NATO alliance for nearly seven hours of virtual interaction. The teams were divided into nine divisions, each with a separate challenge.

The UNG team competed directly with five teams from four other universities, each tasked with providing a solution for “Countering Disinformation,” specifically regarding the Russia-Ukraine conflict. The universities in our division were: The American University in Cairo, Egypt; Nottingham Trent University, UK and two teams from The University of Oxford, UK. Our team consisted of eleven members from both the Dahlonega and Gainesville UNG campus within the PSIA department. Members included Gabriella Bartlett, Michelle Borosak, Odahia Carrasco, Jessica Case, Autumn Coan, Mohini Devadath, Nathanael Hines, Avery Johnson, Gabriela Ocasio, Natalie Pippin, and Ella Reid. Members were supported by Dr. Bibek Chand, Dr. Jonathan Miner, and Dr. Hamid Serri of the PSIA department.

In addition to the inherent reward of meeting and interacting with fellow international peers, the group met with policy strategists and professors, Paola Redondo, and Fabio Biondi, who offered guidance and aid to our proposal. The team collaborated and revised its proposal for three hours, after which we submitted a fully-fledged, two-pronged sustainable solution. Nominated by the team to present the proposal, Gabriella Bartlett then had three minutes to present the team’s work to the panel of judges, followed by an additional three minutes to answer questions from the panel. The first prong of the team’s proposal sought a NATO-funded satellite to provide internet access to Ukrainian military forces and civilians; prong two discussed a collaborative effort between NATO and private corporations to provide VPNs for Russian citizens, free of charge. The panel of current US Army officers, NATO officers, and international cybersecurity journalists deemed our proposal the BEST in our division.

According to Gabriella, the conference offered a “terrific opportunity to research and present potential solutions to real world issues. We produced high-level work within a limited time period, utilizing strong research skills and creative strategies, all which displayed the excellency of UNG’s PSIA students.”

[For additional coverage of the PSIA team’s success see the Gainesville Times and UNG Newsroom.] 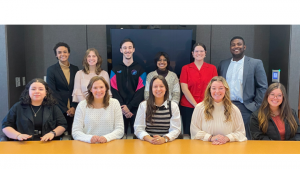