This past summer, UNG was “home” for 40 rising GA high school sophomores, juniors and seniors where they got a firsthand look at the field of intelligence as attendees at the National Intelligence Summer Academy (NISA). Believed to be the first of its kind in the nation, the five-day Academy was led by Professor Dr. Eddie Mienie, executive director of our strategic and security studies bachelor’s degree program, and was funded by UNG’s Institute for Leadership and Strategic Studies (ILSS).

“The academy lifted the veil of secrecy on the hidden world of intelligence, exploring the history, challenges, and controversies,” Dr. Mienie said. “We provided students with a context for understanding the important role intelligence has played in our nation’s history and continues to play today and also provided foundational knowledge of intelligence, setting the stage for possible careers in the field.”

The high schoolers spent the first four days of the academy on the Cumming Campus where they heard from guest speakers on nearly 20 topics including the history of intelligence; roles and functions of the intelligence field; sharing of information between US intelligence agencies; cybersecurity; and the ethical, moral, and legal considerations of intelligence. Speakers included retired decorated FBI agent Dell Spry and former KGB agent Jack Barsky, who, according to Dr. Mienie, “as far as we know, was the longest-serving undercover foreign intelligence agent.” Three speakers came from the CIA — an expert on North Korea’s nuclear missile program; a former CIA agent whose expertise is Russia; and a former head of CIA operations for Africa.” 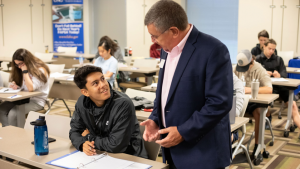 I’m interested in UNG and intelligence, so I thought this was a perfect opportunity. The intelligence community is close-knit with a lot of mutual trust and camaraderie.

Sean Sternot, a rising senior at Milton High School, is interested in the field and spent a great deal of time investigating it on his own before the academy. The week at UNG gave him more insight:

I’ve been able to get a strong grasp on the processes for entering the intelligence community and what a career in the field would look like from experts who have worked in agencies ranging from the State Department to the FBI to the CIA.

Lily Carras, a rising senior at Sequoyah High School, Woodstock enjoyed the experience and said she is now considering studying at UNG:

I thought the academy would lean more toward cybersecurity, one of my big interests, but it’s more focused on the whole basis of special intelligence, and it was a welcome surprise because it helped me discover a new passion of mine.

Planning is already underway for NISA 2023, with applications opening Dec 1, 2022. As for the future, if Dr. Mienie has his way UNG will continue to host this summer Academy annually. “This is exposing young minds to a potential career in intelligence, and it gives them a nice foundation to consider going to a university where they can study further in the field of intelligence,” Dr. Mienie said. “We want to debunk the myth that intelligence is all about 007. It’s not. Hollywood has distorted the whole image of the world of intelligence.”