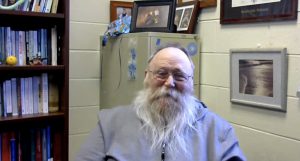 Professor Kerry Stewart announced he is retiring from the University of North Georgia at the conclusion of the Spring 2022 Semester. He has spent 21 years here teaching Political Science and Philosophy as well as Environmental Studies. His areas of expertise include Political Theory/Philosophy, Public Policy, Environmental Studies, and Applied Ethics.

Before embarking on a teaching career, Professor Stewart was a carpenter for 16 years and ended up owning his own construction company. Prior to that he was a chef for about nine years, working his way up to Executive Chef. Before his culinary pursuits, he served in the Navy in the early 1970’s.

Dr. Stewart reflected on the changes in teaching over the years. “I love to teach and still do even after all this time. I used to be very involved in the community. I helped create the Philosophy program in 2003-2004. I was very much involved in the creation of IESA (Institute of Environmental Spatial Analysis) on the UNG-Gainesville Campus. I was the first Chair of the Board of Directors. I was particularly proud of being involved with the expansion of shared governance with the Nesbitt Administration.” An abrupt shift occurred when the University of North Georgia was consolidated and his responsibilities changed; however, he notes, “I’ve been fortunate to have two excellent chairs since I have been here, Chuck Karcher when we were Gainesville State and now in Dlynn Williams. She has bent over backwards on many occasions to help me, and I appreciate it very much.”

Dr. Stewart is enthusiastic about the value of a degree in Political Science. “NGO’s (Non-Government Organizations) look for legislative liaisons, candidates look for campaign managers also communications people… not to mention government jobs out there as well. There is more than just teaching.”

Speaking of retirement, Dr. Stewart opines, “I’ll miss the collegiality I have had in the 21 years I’ve been here.” He does, however, have a lot to look forward to. He bought a cabin in Pennsylvania where he intends to move in June. He plans to spend more time with his son who is turning 18, and they will both enjoy fishing in a lake near their cabin. He might even start playing golf again. He also hopes to do some teaching—which he truly enjoys—at an adjunct position at PA Highlands Community College.

The University of North Georgia Department of Political Science & International Affairs congratulates Professor Kerry Stewart on his well-earned retirement and wishes him enjoyment and fulfillment as he enters the next phase of his life.