Gainesville, GA native Carly Evans, a Political Science pre-Law senior and North Hall H.S. alum spent her Spring 2022 semester doing something very few UNG students have had the opportunity to do — working as an intern in the Georgia Governor’s Executive Office.

We introduced you to Carly and outlined her “then” upcoming internship last December. We caught up with Carly shortly after she finished her semester-long duties with the Governor’s Office and asked her: “How’d It Go?” 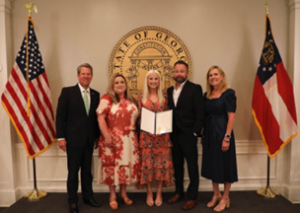 Carly, flanked by her parents Kelley Boyd and Johnny Evans, and Gov. and Mrs. Kemp

After spending several months meeting and working alongside both some of the best students Georgia schools have to offer and many of the most important players in Georgia’s current political scene, Carly sums up her experience as: “It was probably the best opportunity I’ve taken so far in my lifetime … It felt very empowering to be a part of such an incredibly bright group of people.” She admits that early on she “felt like honestly, a lot of the time I didn’t deserve to be there, but as I continued in the position, I grew more confident, realized that, hey, I can compete with these other students or I can match their abilities in the subject matter.” 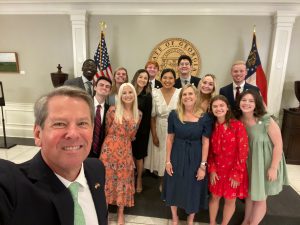 Gov. Kemp and the Spring 2022 interns

As an intern in the Communications Department of Governor Kemp’s Executive Office, Carly had myriad duties, from preparing ceremonial documents such as various proclamations and commendations and working with the various social media accounts, to interactions with the press, including outreach, setting up press conferences, and assisting the Governor’s staff set up for television interviews. She was also able to participate in a number of activities, including spending time in the House and Senate chambers, meeting with Senator Butch Miller and ““hanging out with the Governor’s staff until midnight on Sine Die.” 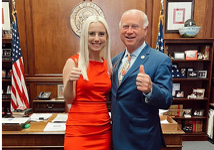 Asked to do a bit of Monday-morning quarterbacking, Carly emphatically says she “would not change a thing”. However, as with all things in life there was at least one negative aspect — no surprise here — the commute to and from Atlanta from Dahlonega every day was (politely put) “NOT fun.”

Carly credits her time with the department as having provided a very strong foundation for her success-filled internship and has “enjoyed every single professor I’ve had in the department… just know that these professors, they really care about you and they are going to help you succeed.”

She specifically credits Dr. Cristian Harris, who is “just an incredible professor … a professor that really inspired me” and Dr. Scott Meachum, who she admits was “super intimidating at first” but whose courses (especially those with a heavy emphasis in law) “are probably the best couple of classes I’ve taken in political science.”

Carly’s advice to UNG students: “Never sell yourself short. Apply for opportunities that you meet the qualifications for, you’d be surprised what you can land.”

Carly’s supervisor in the Governor’s Office gave Carly’s professional work overwhelmingly high marks in all areas. In addition, she stated: “Carly’s bubbly personality also made it easy for her to get along and build relationships with other interns, press, and staff. She has been a delight to have as part of our staff.”

Our congratulations to Carly for a job well done, and for being another in a long line of OUTSTANDING representatives of both UNG and the entire #PSIAfamily!

[Check out our YouTube channel for a more in-depth chat with Carly.]