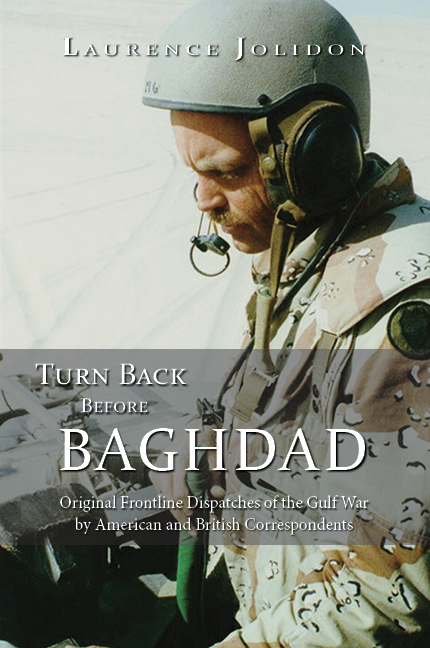 As you may know, the Press has an upcoming release about the Persian Gulf War called Turn Back Before

Baghdad. It takes place 25 years ago during Operation Desert Storm. This was a tumultuous time in which Saddam Hussein was given a choice: withdraw his troops by January 15, 1991 or face the wrath of the United States and our allies.

Turn Back Before Baghdad, including commentary from late Laurence Jolidon, is a collection of firsthand dispatches from American and British news correspondents in the middle of the historically significant events.

While you eagerly wait for the release, here are some other books that may quench your need for some historical wartime accounts. While Turn Back Before Baghdad focuses on the media development and media pools during the events, these picks take a look at some otheraspects of the Persian Gulf War from diverse perspectives.

1) Crusade: The Untold Story of the Persian Gulf War by Rick Atkinson

“This definitive account of the Gulf War relates the previously untold story of the U.S. war with Iraq in the early 1990s. The author follows the 42-day war from the first night to the final day, providing vivid accounts of bombing runs, White House strategy sessions, firefights, and bitter internal conflicts” (Barnes & Noble).

2) Jarhead: A Marine’s Chronicle of the Gulf War and Other Battles by Anthony Swofford

“Anthony Swofford’s Jarhead is the first Gulf War memoir by a frontline infantry marine, and it is a searing, unforgettable narrative. When the marines — or “jarheads,” as they call themselves — were sent in 1990 to Saudi Arabia to fight the Iraqis, Swofford was there, with a hundred-pound pack on his shoulders and a sniper’s rifle in his hands. It was one misery upon another. He lived in sand for six months, his girlfriend back home betrayed him for a scrawny hotel clerk, he was punished by boredom and fear, he considered suicide, he pulled a gun on one of his fellow marines, and he was shot at by both Iraqis and Americans. At the end of the war, Swofford hiked for miles through a landscape of incinerated Iraqi soldiers and later was nearly killed in a booby-trapped Iraqi bunker” (Barnes & Noble).

Keep your eyes peeled for the release of Turn Back Before Baghdad this April. Stay connected with us through the Press blog, Twitter, and Facebook to keep up to date on all upcoming events and releases!