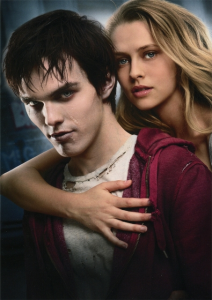 Since there is a worldwide fascination with living in a post-apocalyptic world, Isaac Marion’s novel Warm Bodies was brought to the silver screen at perfect timing. The story combines many genres, such as comedy, drama, adventure, romance, and action. It is one of the first times we see a lovable side to a zombie, and the audience is sympathetic to him. The corpse R, who cannot remember his full name since his transformation, meets one of the planet’s last humans, Julie, during a raid with his fellow corpses.  Immediately, he feels a change within himself and an overwhelming need to protect her. To keep her safe from other zombies who live nearby, he helps her pretend she is dead  and covers  her with his black blood. He takes her back to the airplane he lives in at an abandoned airport. During their time spent hiding out at the airport, a mutual attraction and connection forms between them. Julie realizes R is unlike other corpses because he has feelings and a desire to be different, and so he is changing. The more his feelings for Julie grow, the more humanlike and alive he becomes.

While the novel and film follow the same plot and contain the same characters, there are differences in the two. Julie is much more feisty and outspoken in the novel, but besides that all other characters are practically the same in both. When R decides he must take Julie home, the movie makes small adaptations for the rest of the story.  Both novel and movie show R eating Julie’s ex-boyfriend’s brains and gaining his memories. Yet, in the novel, R continues having a supernatural connection with Perry, the ex-boyfriend, and is often communicating with his soul. In the novel, R and Julie spend much more time together. R also has children that the Boneys gave him, because they needed to be taught by someone. The Boneys are evil zombies who are so far gone they have no flesh. The movie does not show R having children or a wife, as he does in the novel, because that could potentially distract the audience from the love story. R and Julie’s escape 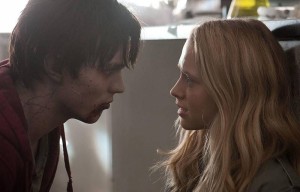 from the zombie-infested airport is much more dramatic in the movie, where they have to out run the Boneys, and they hold hands for the first time, symbolizing a union between the living and dead. The movie does  a great job of showing how that act was a spark that ignited inside the other corpses. In the novel they walk out, but still leave an impression on the corpses who saw their attraction. However, the time the two spend in an abandoned home on their way back to Julie’s home is more detailed in the book and the two share a bed when Julie is afraid. This moment shows that Julie is beginning to need R, just like he needs her in order to cure himself.

R goes to the enclosed stadium, where Julie and the other human survivors reside, to show Julie that he and the other zombies are changing. In the movie, R only spends a few hours with Julie inside her city, while in the novel he spends a few nights there with her. The endings of the novel and movie are also different. While both end happy and have the lovers alive and together, the movie’s version of how they reach that point is much happier. There are more tragic events that take place throughout the novel, including the fate of Julie’s father. The novel is darker throughout the entire plot, and this is why the positive ending is so uplifting. Both the movie and the book show that it is the passionate kiss shared by R and Julie that causes a force to radiate out of them so strong that it brings the corpses in their city back to life. This ending is not so surprising, and the previews for the movie lead viewers to believe this will be the end result, and that the two lovers will travel and help cure other zombies located around the world. This is why the audience should read the novel before seeing the movie, and then they will be surprised by the ending.

This story brings the idea of “love makes you feel alive” and “love having the power to heal all” to a whole new level.  Love and passion truly are powerful enough to completely change and restore. In a 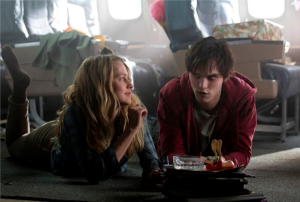 post-apocalyptic world, perhaps that is all that is left and all that is needed. The story makes you appreciate the simple, mundane aspects of life that are so often overlooked. R finds pleasure in these because he so desperately craves to be alive, and Julie clings onto the simplicity of her past life because now all of those are gone, and her entire world is trapped inside a stadium with the few survivors of the apocalypse. When love is brought back into their lives, the world for both the living and the dead is once again filled with color and happiness. So no matter how dismal the post-apocalyptic world is, with love there is always hope and life. Love restored life to their world, and to me that is the best message of the story. I give both the movie and novel four stars.