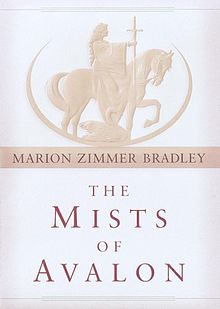 As a Gender Studies minor, I am aware of the roles of women and the portrayal of gender norms in novels that I read for class. However, I was first introduced to gender studies as a way of life—not as an academic discipline—through reading Marion Zimmer Bradley’s The Mists of Avalon. This book is a look at Arthurian legend through a modern feminist’s eye:  Bradley delivers a wonderfully crafted story of the women behind, around, and amongst the male players in King Arthur’s story.

We primarily see the rise and fall of Camelot through the eyes of Arthur’s sister Morgaine, Bradley’s version of Morgan le Fay, but the story is also told by Arthur’s mother (Igraine), aunts (Morgause and Viviane), and wife (Gwenhwyfar, a Welsh spelling of Guinevere). And it is by tipping this legend on its head and exploring it through the women that Bradley cuts deep into issues relevant now and a thousand years ago.

Instead of showing us what’s happening at the Battle of Badon Hill, Bradley paints the very real horror that Gwenhwyfar and her serving women feel at the possibility of Arthur losing the war. Bradley does not dwell on Mordred’s hatred of his father; she shows us Morgaine’s feelings of utter hopelessness at having conceived her half-brother’s son. And rather than show us the brotherly ties of Gawain and his brothers, Bradley displays how very different life was for Queens in the northern reaches of Arthur’s kingdom.

UNG BEST DAY EVER! launched with a bang last week

So, cadets, you survived FROG week and classes are

BEST. DAY. EVER. This charming picture book about