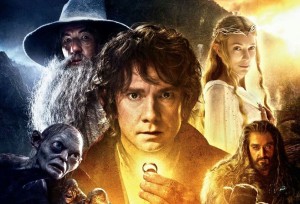 In Middle Earth there lived a very small hobbit, who was destined for a very big adventure. J.R.R. Tolkien wrote The Hobbit in 1937. The novel is about the adventures of the hobbit Bilbo Baggins, and how he joins forces with a band of dwarves and the wizard Gandalf to win back the dwarves’ land and treasure, which is being guarded by the dragon, Smaug. The novel and its heroic characters resonated with audiences of all ages; and the novel has remained wildly popular since its first publication. Following its success, the publishers pushed for a sequel. Tolkien then wrote The Lord of The Rings, which has become even more popular than its predecessor. The epic, blockbuster film: The Hobbit: An Unexpected Journey was released in theaters on December 14, 2013, and was released on DVD/Blu-ray on March 19, 2013. The film, which 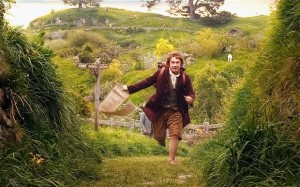 had a budget of $315 million, took in a total revenue of $1,016,893,299. Peter Jackson, who directed the Lord of the Rings trilogy, directed this fantasy/adventure prequel to that trilogy also. The novel was broken up into three parts for film, and the two other films in The Hobbit trilogy will be released in 2013 and 2014, respectively.

While the film does stay fairly close to the novel, many changes were made to the script. This could be because the novel was broken up into three parts for film, so some gaps needed to be filled in. The Hobbit: An Unexpected Journey only covers chapters one through eight, out of nineteen total, of the novel. Most of the dialogue from the script is used verbatim in the film, so the film characters say the same thing as the characters in the novels. Some of the main plot changes are listed in the following paragraphs.

The film begins showing Bilbo write the story for Frodo, as a way to tie the two sagas together, whereas the novel gets right down the story and Gandalf appearing to Bilbo. When the dwarves arrive in the novel, it is at teatime, and it is dinner time in the film. The story of the dragon is the same, yet in the novel, Thorin does not see the Elves turn away from him in his people’s hour of need, so he does not hate the Elves. There is not a conflict between Thorin and the Elves in the novel, because the Elves did not “abandon” the dwarves. The film has a much more dramatic portrayal of Bilbo deciding to go on an adventure, whereas in the novel Gandalf tells him to meet in a few minutes and Bilbo just goes off to meet everyone.

Once their adventure officially begins, the group runs into trouble with the trolls. 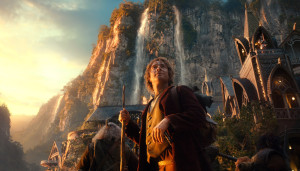 In the film, Bilbo delays the trolls from eating the dwarves by telling them how to cook them, and then when Gandalf returns in the morning light, the trolls turn to stone. However, in the novel, Gandalf uses different voices to keep the trolls arguing with each other, until they lose track of time and turn to stone when the sun comes up. After this scene, the next thing that happens in the film is the company spends time with Radagast the Brown. This wizard has a chariot of rabbits and leads the orcs away from the company as they make their way to Rivendell. In the novel, however, this scene never takes place and they do not meet him in The Hobbit. In the novel, the company stays in Rivendell with the Elves for fourteen days. In both the film and the novel, the elf Elrond reveals the secret door in the mountain that they are searching for can only be revealed on Durin’s Day. The novel does not show Gandalf meeting with the White Council during their stay at Rivendell, as he does in the film. Also, Galadriel is 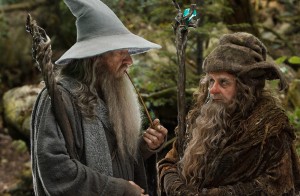 not even in the novel, yet she appears in this scene in the film.

The novel and film show that Bilbo is awake in the cave, which wakes everyone up when the Goblins take them captive. In the novel, right after the goblins discover Thorin’s sword, Orcrist the Goblin Cleaver, Gandalf appears and kills the Great Goblin and leads them out of the mountain. In the film, the Great Goblin wants to hold Thorin captive for the bounty money promised by Azog. Also, in the novel Bilbo is not separated until after Gandalf saves the company. The scene of riddles with Gollum is the same in both. After Gollum realizes Bilbo 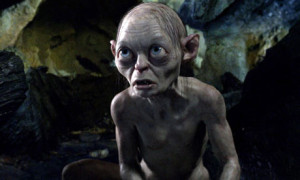 stole the ring, and Bilbo realizes the ring is magic and makes its wearer invisible, he is able to sneak past Gollum and escape. The novel also has Bilbo to sneak past more goblins after he leaves Gollum, before he is safe. In both, Gollum curses the hobbit and vows to hate him forever.

The ending is of course different, because the film ends in only chapter eight of the novel. The novel does not include a fight with the orcs after Bilbo returns to the group. All the dwarves and Gandalf think higher of him after seeing how he escaped and returned to them. The final fight in the 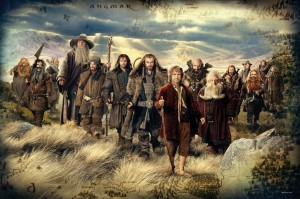 film is with the orcs, yet in the novel, since it is only chapter eight, nothing that dramatic happens. Instead, a pack of wolves chase the company up into the trees. When the goblins and wolves are about to burn the company, eagles save them and carry them to their home. Eagles also save the company from the orcs in the film, but it was not until after that new, dramatic fight scene was added.

Fortunately, the changes to the script do not take away from the incredible plot, 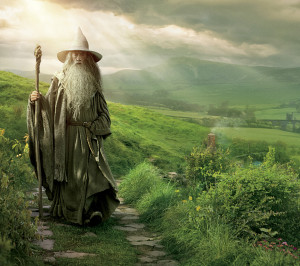 instead it only enhances it. The story still has the major themes of courage, growth, adventure, and friendship. Tolkien’s characters are brought from imaginations to life and onto the silver screen. The sense of excitement and adventure is present in both novel and film. Reading the novel is like being completely immersed into another world; and watching the film is like being swept away into a fantasy full of intrigue and mystery. It is rare that both a story’s novel and film can be equally powerful and entertaining; but that is definitely the case with The Hobbit. Tolkien and Jackson have combined humor and action into epics that will forever be a legacy. 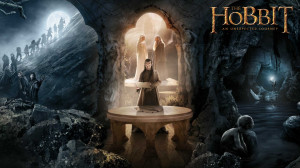