Being a child of Generation Z (late 1990s to present), I am not very familiar with all the long, classical films with slow-paced plot lines and old-school actors. What I am familiar with is the current trends in entertainment such as dystopian futures, vampires, witches, wizards, and teen drama, so here are a couple of my favorite movies adapted from books. 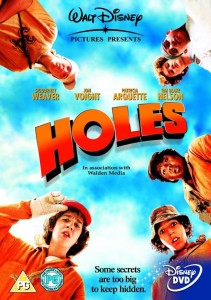 The movie Holes came out on Disney Channel when I was in the fourth or fifth grade and remains one of my favorite movies to this day. It is based on the novel of the same name by Louis Sachar, which I didn’t read until after the movie was released. However, Holes was one of those movies that barely veered from the original book because Sachar wrote the screenplay himself and the cast were true to their written versions. The story revolves around a camp of juvenile delinquents who are forced to dig holes in the dry desert as a “character building” activity. Unbeknownst to them, they are actually searching for a buried treasure for the camp’s warden, played by Sigourney Weaver. The main character, Stanley Yelnats, played by a young Shia LaBeouf, slowly begins to uncover the warden’s real motives, as well as the history behind Camp Green Lake. The themes of the movie include racism, justice, and friendship, which all play out beautifully on the screen with the help of the actors. Academy Award winner John Voight delivers the role of the antagonistic Mr. Sir with hilarity, and Tim Blake Nelson only adds to the comic relief as the timid Dr. Pendanski. Of course, no Disney movie would be complete without a few cheesy and overdramatic elements, such as yellow spotted lizards or all the childish nicknames given to the boys at the camp, but to children and those who grew up with the movie, these features just add to the fun and creativity of the plot. Holes isn’t just one of those movies you watch once and never watch again. After a while, you start to gain an appreciation and a connection to the characters and really want them to succeed in the end. Even when it comes on now, eleven years later, I still enjoy the story of Stanley Yelnats and how his bad luck turned to good.

Later in my adolescent middle school years I read one of my favorite books of all time, S.E. Hinton’s The Outsiders. It was such a moving novel about growing up and dealing with the prejudices of the time period. Coming of age in the 1960s, Ponyboy, played by C. Thomas Howell, lives a poor life with his two brothers. In his world, he is known as a “Greaser” and the rich, well-to-do people are known as “Socs.” The two groups are in constant battle and after a set of tragic events Ponyboy must find a way to protect the people he loves most. I was completely captivated by Hinton’s words and it led me to read more of her works, though none compared to The Outsiders. After falling in love with the book, I had high expectations of the movie. I watched it both in the classroom and multiple times by myself with my special edition dvd, and I must say it met my expectations. The cast was perfect with the 1980s “Brat Pack” including Emilio Estevez and Rob Lowe, as well as other major 80’s stars like Ralph Macchio, Tom Cruise, and Patrick Swayze. They all added their own flair to the complex characters and really brought them

to life with enthusiasm and entertainment. Matt Dillon especially captured the role of Dallas, with his tough appeal yet innocent heart. The movie also really highlights the setting of the novel. The church that Ponyboy and Johnny hide out in is nearly perfect to the descriptions in the book, and the town of Tulsa, Oklahoma in the 60s is just how I pictured it, with old fashioned cars, shops, and drive in movie theaters. Like Holes, The Outsiders adheres to the original plot well and doesn’t stray from any of the prominent parts of the story. Even more importantly than the plot, it really captures the emotions a teenager goes through as he or she is learning to become an adult. I think the teenagers of the modern day can really relate to the struggles Ponyboy has to face such as bullying, love, rejection, loss, and loneliness. It’s an excellent coming of age movie, and it reminds all of us, young and old, that nothing gold can stay. 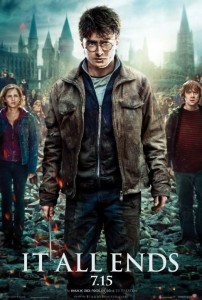 To round off our list I have decided to go with the one and only Harry Potter series. Yes, I know, everyone chooses the Harry Potter series, and I probably should be a little more creative with my choices. But if I am being completely honest, the series is one of the best adapted films of my generation. Most of us know the story about the teen wizard and his journey to overcome evil with the help of his friends, but what makes these books and movies so special that they have literally made billions of dollars? The first reason is that the books are targeted to any age. I read them when I was a child, but my aunt read them in her late thirties and enjoyed them just as much as me. This made the target audience for the movies wide as well. It is a story everyone can appreciate with very likable characters and creatures. The second reason is the film’s ability to portray magic and supernatural powers in a very realistic light. Okay, so I’ll admit the first two movies were full of cheesy animatronics and bad costume design, but that doesn’t mean they weren’t good at the time they were released. The other movies however, were full of brilliant cinematography and special effects that really came to life on screen. One of my favorite scenes in the entire series is in the seventh movie, Harry Potter and the Deathly Hallows Part One. As Harry, Ron, and Hermione are moving through the English country side, the picture of the beautiful landscape in contrast with the static radio naming off missing or dead wizards seems like something from World War II. It is such an emotional and powerfu  l moment, and shows how Harry’s struggles, though based around magical elements, are just as terrifying and stressful as real world issues. I could go on for hours about how wonderful these movies are to me, but that would make this blog way to long. Even though the movies and books have ended, the legacy still lives on through the amusement park, video games, and even in school classrooms. Harry Potter will forever be the boy who lives.

Hey #veterans! Heading back to school this fall? P