Bride and Prejudice transforms the original classic into a modern Indian Musical. Director Gurinder Chadha describes India’s customs as similar to that of Seventeenth Century Britain. Daughters are still married off to wealthy men and the oldest must marry before any of her sisters are allowed to enter society.

This Bollywood-version of Pride and Prejudice is set in Amritsar, India and follows Lilita Bakshi and her three sisters Jaya, Maya, and Lakhi. 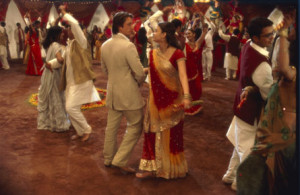 Much of the plot follows directly with the book, but with modern Indian twists. Jaya and Lilita are introduced to Balraj and Will Darcy at a friend’s wedding. Lalita finds Darcy arrogant and prideful, and soon befriends Johnny Wickham (Darcy’s former acquaintance). Lilita is also proposed to by the Bakshi’s American cousin Mr. Kohli, an accountant. After her rejection, Mr. Kohli marries Lilita’s best friend, Chandra Lamba. During a trip to America for Mr. Kohli and Chandra’s wedding, Lilita begins to fall in love with Darcy, but similar to the original story she finds out that he sabotaged the relationship between Raj and Jaya. Lakhi also runs away with Johnny Wickham, and it takes Darcy to bring Lakhi back to her family and Raj to come back and propose to Jaya. In the end, Darcy also proposes to Lalita, and the two couples have a large Indian wedding.

This film holds true to many Indian customs that still reflect Jane Austen’s world. Add in musical numbers and lively characters, and this is one of best adaptations of Pride and Prejudice. 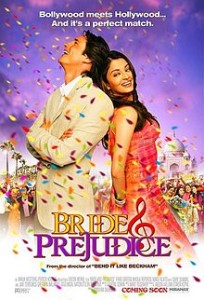