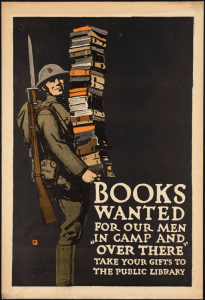 I am excited to announce that 100 years after the initial publication Arthur Guy Empey’s Over the Top is available in a new edition in April 2017. It has been my dream to someday see this important work back in print so that another generation of readers could enjoy this wartime best-seller. As part of a series commemorating the centennial of WWI, it is fitting that the first title in the Doughboy Series, published by the University of North Georgia Press, should be this most popular work by an American writing on trench warfare and that was originally published during the war itself.

Over the years, colleagues and students have asked me what should be the first book about World War I that they should read.  I always tell them to find a copy of Arthur Guy Empey’s Over the Top and read it in one sitting, if possible. It is the most comprehensive and engaging introduction to the experience of trench fighting in print. Until now, the only copies that were available were, unfortunately, nearly one hundred years old and hard to find.

When I was presented with the opportunity to edit the first in a series of classic World War I novels, my choice was simple. Not only have I always wanted to make Over the Top more widely available, but I have also wanted to edit it to make it more accessible to modern readers. Only hinting at his pre-war experience in the book, Empey discretely censors many locations and unit leaders in an attempt to protect wartime intelligence. Additionally, not all of the terms he used make sense today, but I attempt to put the language and history all into context for today’s readers. While the essence of Empey’s unique writing style is retained, an introduction to the author himself, the setting of the front lines of the Western Front, and illustrations have been added.

One would have to read a number of books or collections of letters by other veterans to enjoy the same level of detail offered in Empey’s Over the Top. It is a classic that I reread every few years. Each time I study it, I find new details.

Check back to see specifics of the premier of Over the Top and how you may order your own copy. As the publication of this and other titles in the series progress, additional blog posts will tell more details about the war, the original author, and the editor’s comments about bringing the book to a modern audience. Expect to see additional annotated editions of other Doughboy classics appear in print throughout the Centennial of the Great War.

Happy birthday to one of the greatest novelists of