British film critic, Quentin Falk, will be coming stateside to promote his book, Travels in Greeneland. There will be two chances for you to meet him and get your book signed!

Quentin Falk, British author, critic, broadcaster and film journalist, has written acclaimed biographies of Anthony Hopkins, Alfred Hitchcock, Albert Finney, Lord Lew Grade and the Rank Organisation following his first book, Travels in Greeneland: The Cinema of Graham Greene in 1984, which was short-listed for the Mobil/British Film Institute Book of the Year Award. A former editor of the European trade paper, Screen International, and Academy, the British Academy of Film & Television Arts’ (BAFTA) magazine, he has also been a movie reviewer for the Daily Mail, Daily Telegraph, Sunday Mirror, and Catholic Herald. In 2013, he was the First Visiting Author at the University of North Georgia. 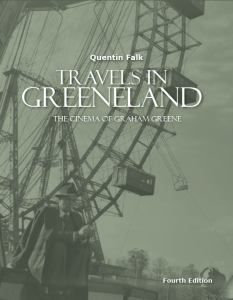 Graham Greene is one of the twentieth century’s literary giants, and his work has been translated to the cinema more than any other major contemporary novelist. Author and film critic, Quentin Falk examines all aspects of Greene’s involvement in the world of film, including his stint as a movie critic in the 1930s in his book, Travels in Greeneland: The Cinema of Graham Greene. Contrasts are made between the work that Greene himself adapted for the screen such as The Third Man and Our Man in Havana, and the work that has been adapted by others, like The Heart of the Matter and The Honorary Consul. This gorgeous new edition contains a new chapter which includes two of the newest Graham Greene movie adaptations: 2002’s The Quiet American and 2010’s Brighton Rock.

Copies of Travels in Greeneland will be available at both signing locations for purchase.

The first diary entry in 1,271 DAYS A SOLDIER was