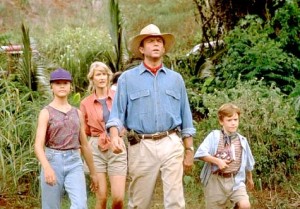 Michael Crichton wrote the science fiction novel Jurassic Park in 1990. Three years later, Steven Spielberg adapted the novel into the blockbuster, epic film of the same name. The Universal Studios film Jurassic Park was widely popular, and was the first time that audiences truly got to be captivated by realistic, animated dinosaurs. The film was so secret, that no dinosaurs were revealed during the previews.  Audiences had to actually see the film in theaters in order to be immersed, frightened, and excited by the film’s graphics and heart pounding storyline. The film grossed over $900 million. On April 5, 2013, Jurassic Park 3D was released in celebration of the film’s twenty-year anniversary. The film stars Sam Neill, Laura Dern, Jeff Goldblum, Richard Attenborough, and Samuel L. Jackson.

Crichton’s novel is a tale of an amusement park full of genetically, man-created dinosaurs. Chaos ensues when the dinosaurs outsmart the humans, 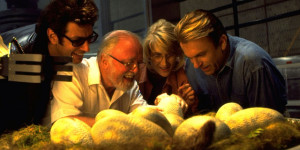 and are able to take over the park. Nature cannot be contained, and it always finds a way. The story is a metaphor that warns audiences of biological engineering that is performed without thought of the consequences. The scientists extracted dinosaur DNA from fossils to create real life dinosaurs, yet dinosaurs went extinct for a reason, so they should not be brought back into a modern world. The novel also shows audiences that they should respect nature. Spielberg and Universal Studios acquired the rights to the story before the novel was even published, and early stages of production of the movie began. Crichton and David Koepp wrote the screenplay for the film, but they added many changes to the characters, and it removed a lot of the violence that was in the novel. Yet, the theme and message of the story is the same in both forms.

For the most part, the novel and film follow a similar plot-line. Paleontologists Alan Grant and Ellie Sattler are flown to Costa Rica by John 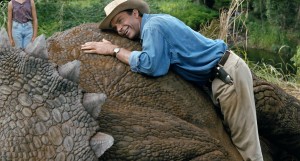 Hammond, because he wants to show them the new dinosaur theme park, Jurassic Park, which he created. The paleontologists, and mathematician Ian Malcolm, are meant to be his supporters to the attorney Gennaro, who is unsure about the park. Both film and novel describe prehistoric amber, which housed mosquitos from the time period, and they contained dinosaur’s blood in their system. Jurassic Park scientists extracted this DNA and used frog DNA to account for the gaps in the DNA strands. Thus, dinosaurs were (re)created.  Both novel and film have Dennis Nerdy (played by Wayne Knight in the movie) shutting down the park’s entire security system, thus allowing the dinosaurs to escape their fences, which sets the stage for all the terror that makes the story a thriller.

There are some minor differences though. In the novel, Ellie is Alan’s graduate student, yet in the film it is subtly implied that the pair ar 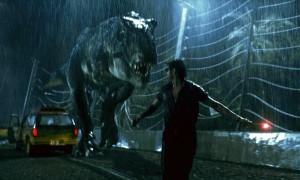 e an item. In the novel, the group, along with Hammond’s grandchildren Tim and Lex, goes exploring and Grant discovers a Velociraptor shell. This discovery proves Malcolm’s theory that even in an all-female population, nature will find a way, and some dinosaurs have switched sex in a single-sex environment. In the film; however, this discovery is not made until after Grant and the children have been chased by a Tyrannosaurus Rex. In the novel, Malcolm points out many other flaws within the park to showcase the fact that the park has been operating out of their control.  The novel also does not have the attorney being eaten by the T-REX. This dramatic scene in the film with the attack on the group in the Jeeps is not found in the novel.

In the novel, the management shuts down the power, restores, and then the power is lost for a second time. In the movie, for time constraints, the second power outage is left out. Also, the novel has another dramatic twist that is not shown in the film. Grant and the two children are rafting down the river back to the Visitor’s Center in the park, where everyone else is, but they see baby Velociraptors board the island’s supply ship, which is 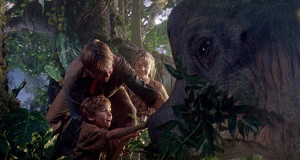 headed straight for the Mainland. Tim is able to contact the ship, and the raptors on board are killed. In the movie, Grant and Ellie deal with the raptors, while Lex restores power to the park. In the novel, Ellie distracts the raptors, Grant restores power, and the children contact the supply ship, but many dinosaurs have escaped to the mainland. Later in the novel, Hammond falls down a hill and is eaten by dinosaurs. In the film, he survives without so much as a scratch. It is also implied in the novel that Malcolm dies after being injured, yet in the film he survives. (In Crichton’s sequel to the novel, The Lost World, Malcolm is the main character and we learn that he did indeed survive). The novel ends with the survivors boarding a helicopter, and the Costa Rican Air Force destroying the island. Grant, Ellie, Tim, Lex, and the other

surviving members of Jurassic Park are detained by the government, and the final paragraph of the novel states that they will not be leaving anytime soon. They will be questioned about these mysterious dinosaurs. The film, however, ends with Grant, Ellie, Tim, and Lex being surrounded by raptors, and in the last minute the T-REX comes in and saves them. The four of them, along with Malcolm and Hammond, board a helicopter and fly to safety.

Michael Crichton’s novels have sold over $200 million copies worldwide, and his novel Jurassic Park brought dinosaurs into pop culture. Jurassic Park is the nineteenth highest grossing film of all time, and it continues to get positive reviews from critics. It also won three Academy Awards.  The film generated three sequels, and it has been revealed that Jurassic Park 4 is slated for release June 2014. The 3D release of the film has great reviews, and the visual effects work well with the 3D graphics and 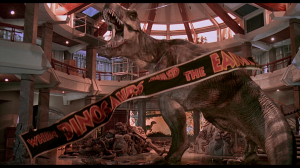 imagery.  It is an experience definitely worth seeing once more. Once again, audiences can be brought back into an adventure that is over sixty-five million years in the making.

What are you reading on national #armedforcesday?

During this #PoliceWeek, we recognize those who ha

Movie night, anyone? 📽️ For film fanatics (a

Today is dedicated to lonely nights and happy reun

“Finding sources of inspiration and ways to sust

New praise for TALES FROM THE COLD WAR! “In thi