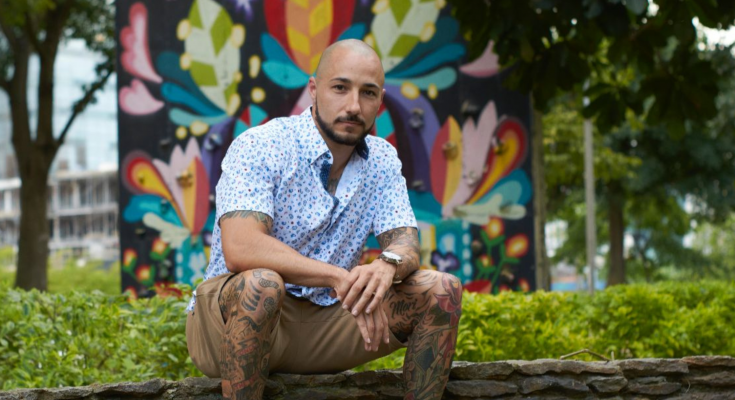 We asked author John H. Davis about some of the difficulties that veterans face when returning to college after military service. John explores all of these topics and more in Combat to College, out September 20, 2022!

What led you to write Combat To College?

I felt like I had to. I was working for the VA (Veterans Affairs) during my undergrad, helping student veterans. I started simply giving tours to incoming student veterans, and that led to a sort of unofficial mentorship role where I was using the leadership skills the Army gave me to guide them through their first year. In the military, we are used to having mentors, coaches, and leaders who want the best for us. The civilian world doesn’t have that, and I recognized that a lot of veterans weren’t making it through their first year of school. I consider Combat to College a friend to guide you through your first year of your education after the military.

What differences stuck out to you between you and other “normal students” in college?

I was older, which brings more responsibilities. I had been divorced, had PTSD, and hadn’t been in formal education in over ten years. I dressed differently, had more tattoos, cursed more, and I felt very out of place. I felt like an alien trying to blend in.

Why do a lot of veterans not take advantage of the GI Bill?

When you finish high school, you basically have three life options: the work force, the military, or college. We chose the military over the other two options, so a lot of veterans feel like college just isn’t for them. It wasn’t for me when I was eighteen—I lacked the maturity and discipline to be successful in college at that age. I wasn’t interested in learning then. After gaining maturity and discipline in the military, I was able to eventually be successful in college. It almost feels like college is a step back after the military, and you feel behind in life when starting college older.

How can more student veterans graduate?

The first step is that more of us need to go to school. Traditional education isn’t for everyone, and the GI Bill recognizes that and will pay for internships, vocational training, and even things like scuba school! Growth is important for veterans after leaving the military: to be lifelong learners because education, even self-education, is so important. While we are in college, we can’t only remain in our isolated veteran bubbles or only go to class and leave. College is a time for young people to discover themselves and their passions, and it isn’t that different for veterans. We must recreate our identity after our military service. The military sends you on somewhat of a journey of depersonalization. Figuring out who you are outside of the uniform can take time, and college can provide that time.

Veteran mental health is a big deal. How can a college degree help that?

Kind of a harsh truth, but people with college degrees are less likely to kill themselves. Put degrees in the hands of more veterans, and more veterans will find reasons to live. Education provides life opportunities, and with more life success comes less problems. A lot of veterans end up in sort of an in-between place, not in the military but not at home in the civilian world. That leads to veterans feeling confused and floating out of place, but college can be the bridge between the two worlds.

How can college help veterans integrate back into society more seamlessly?

One of the problems the military community is facing is that the gap is growing larger and larger between the military and civilian populations. Fewer Americans have a personal connection to the military than ever before. It’s confusing how we can fight wars for twenty years only to drift further from our civilian population, but it happened. That one veteran in the classroom might be the only veteran some of the students know. We tend to live in our military worlds, on military bases behind gates. We have our own hospitals, schools, movie theaters, malls, and communities, which cuts us off from the population we are protecting. Transitions take time, they take effort, and if student veterans can feel like valued members of the college community, they can find a place in society after graduation.

What can schools do to make student veterans a part of the college community?

In the classroom, student veterans can enrich the learning experience. The best professors engage student veterans on their military experiences to the benefit of the learning environment. The military teaches you a lot—it isn’t all guns and bombs and what you see in the movies. Some colleges have dedicated veteran spaces where veterans can meet one another and get local military resources. College administration should put an arm around their military populations and seek to make them included. Around Veterans Day or military holidays, schools can have a veteran panel where students and faculty can ask veterans questions about their service and transition. Veterans should be encouraged to join other campus groups to feel at home around other students.

How has the COVID pandemic impacted student veterans?

When we are in the military, we are part of a strong community of people, and that loss of community when we get out of the military is hard enough. Then when we aren’t able to forge new communities, student veterans suffer. Veterans are also more experiential learners. You can’t learn to shoot a gun without shooting a gun. We are, as a group, somewhat skeptical of online learning. Online learning is already less structured than college, which isn’t very structured at all, at least compared to the military. We tend to be a little older, which can mean not as technologically savvy as younger students, and we tend to get frustrated with the complexities and technical difficulties of online learning. We are more likely to have families, have additional stresses, and need to work during our college experiences. Over half of the student veteran population in this country has some service-connected disability. Online learning from home can be more difficult with disabilities. The social aspect of college is more important for student veterans than traditional students because we have to learn how to be civilians again and can’t do it behind a screen. Online learning doesn’t engage veterans as much as we hope. It feels almost lifeless.

You mention political professors in your book. How can they influence student veterans?

We come from a world where we work together and everyone is on the same team. The civilian world and college campuses can feel more divided. Instead of highlighting differences, colleges should work to highlight similarities. College professors and student veterans can clash in the classroom. I’ve seen veterans storm out of rooms after disparaging remarks were said about the military or current conflicts. Having lost friends in Iraq and Afghanistan—and maybe a part of ourselves through our experiences—we can feel strongly. For student veterans, a lot of arguments are not worth having. You aren’t there to have political disagreements, you are there to learn and get your degree. Professors can live in somewhat an academic bubble. When I was at Harvard, I could see how some professors seem to live in the ivory tower of education and not the real world where veterans live. We want our population more engaged with the military, not less. We can start to bridge the divide between the military and civilian populations in college, which provides an excellent place for it.

What can veterans with PTSD do to improve their college experience?

Learning is healing. What is great about college is the importance of self-growth on the learning journey. We have to stop treating PTSD as a forever diagnosis; it isn’t unfixable, and college is an excellent place to work on yourself—that’s what you’re there for. Often times, we see veterans struggling more with transition stress than what we classically think of as PTSD. It’s not always stress from the battlefield that impacts student veterans, it’s feeling like an outsider. It’s feeling like you don’t belong. The entire point of college is to make yourself into a more intelligent and capable person. Education can provide meaning and a better future, and in college you can find a sense of community and prioritize yourself. For the first time, you can put yourself first and not the military.

John H. Davis is a decorated combat veteran with multiple tours in Afghanistan. He has since dedicated himself to veteran advocacy, receiving congressional, legislative, and local recognition. He earned his master’s degree in education from Harvard and his bachelor’s in history from St. Joseph’s College. He has spoken to Congress as a legislative fellow for the Veterans of Foreign Wars and the Student Veterans of America and is an active member of the American Legion, Veterans of Foreign Wars, and the US Military Vets Motorcycle Club. John is passionate about traveling, fitness, and veteran causes.

Ask the Author: Tommye McClure Scanlin, The Nature of Things