Born on August 2, 1924, in Harlem, New York, James Baldwin grew up in one of the most famous cultural hubs in America at the time, known for the Harlem Renaissance. He developed a love for reading at a young age and carried that love into high school where he worked on the school’s magazine. His career started there when he began publishing poems, short stories, and plays in the magazine.

After working various odd jobs to support his family, Baldwin decided to seriously pursue his writing career and moved to Greenwich Village, a popular neighborhood for New York artists and writers. With hard work, dedication, and a fellowship with writer Richard Wright, he was able to cover his living expenses through the essays and short stories published in periodicals like The Nation. In his pieces, Baldwin discusses race and religion, and while he wrote well on these topics, Baldwin felt confined by the prejudices in America. He then accepted another fellowship, this time in Paris; this trans-Atlantic move is when Baldwin truly came into his own as a writer.

In Paris, Baldwin did not feel limited in the topics that he chose to pursue in his writing.  He explored his race, sexuality, and religion and used 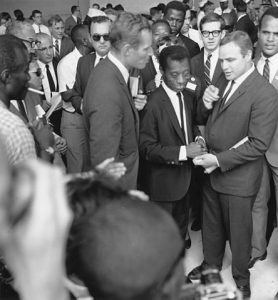 writing to navigate those murky waters. Many of these themes can be seen in both his novels and his short stories, where he fearlessly wrote about being black in America and how sexuality is not limited to the binary that society has made the norm. Some of his most famous short stories are “Sonny’s Blues,” “Going to Meet the Man,” and “The Man Child,” which can all be found in the collection titled Going to Meet the Man.

In his lifetime, James Baldwin had experienced ample violence and prejudice, but also freedom and fearlessness—all of which he channeled into his work. In his later years, Baldwin shared his experiences in the college classroom at the University of Massachusetts at Amherst and Hampshire College before passing away on December 1,1987. Baldwin never wanted to be a spokesperson for a cause, but a person who bears witness to truth, and he truly accomplishes this through his literary legacy.

View all posts by Cassidy Webber →