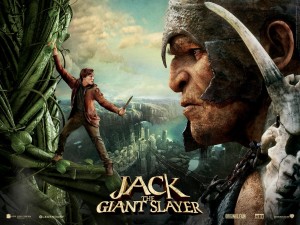 It is quite possible that anyone who used to have bedtime stories read to them as a child had “Jack and the Beanstalk” read to them at one point. The old English fairytale is so well-known that it has spawned numerous versions across the ages. Benjamin Tabart wrote an early version in 1807, which was the first time the story appeared in print. In 1890 Joseph Jacobs rewrote the fable in English Fairy Tales. This version is the one that is most commonly printed today. Several film adaptations of this fable have also been produced. The most recent is the Warner Brothers film Jack the Giant Slayer which was released in theaters March 1, 2013. The film stars Nicholas Hoult, Ewan McGregor, Stanley Tucci, and Eleanor Tomlinson. In order to make this film a modern day epic, action film, there were changes and drama added to the story. 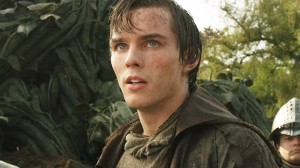 The original fairytale begins with Jack’s mother sending him to town to sell their only cow, because they are in desperate need for money. Jack, however, sells the cow to an old woman in exchange for magic beans. The mother is so furious at Jack for not making a profit, and she throws the beans out the window. The magic beanstalks begin to grow into a gigantic beanstalk, which Jack climbs. When he reaches the top, he finds himself in the home of a giant, who smells a human and wants to eat him. The giant yells the famous words: “Fee-fi-fo-fum!” when he senses Jack’s presence. Jack escapes from the 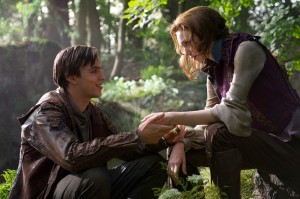 giant, and steals a bag of gold and treasures, such as a hen that lays golden eggs and a magical harp, that he takes back down the beanstalk with him. Jack and his mother chop down the beanstalk, and of course, live happily ever after.
In Jack the Giant Slayer, the action does not begin until Jack is grown. He trades his uncle’s horse to a priest for magical beans. When the princess runs away and takes shelter from the storm in Jack’s small home, the beans begin to grow and the giant beanstalk grows up through his home, taking the princess to the land of the giants. Jack and the royal guard embark on a quest up the beanstalk to rescue the princess. After many perils, Jack slays one of the giants to rescue his new friend, Elmont, and Princess Isabelle, and they return to the kingdom. However, all is not well yet because the giants climb down the beanstalk and invade the kingdom. As the giant king is about to destroy Jack and Isabelle, Jack throws the final magic bean down the 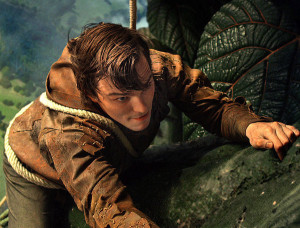 giant’s throat, causing the beanstalk to burst out of him, and kill him. Jack then takes the magic crown, which the giant had been wearing as a ring, and wears it. Whoever wears this crown is the ruler of the giants, and the magic is so powerful that the giants are forced to obey. Jack saves the kingdom and sends the giants back to their world, and he and Isabelle are married. The film ends with Jack and Isabelle telling their children the story, which turns into modern times with people telling their children the story, and the audience sees that today the magic crown is safe inside the London Tower.
The film made some necessary changes in order to connect with many different demographics. Jack was aged and had a love interest in order to reach the romantic audience, much 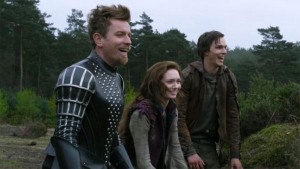 more action was added to reach the adventurous audience, and the film was a comedy so it was not solely action the entire time. Whenever an old and well-known fable is turned into a film, it is a gamble for production companies. Some people will want to see the film because it is a version of a beloved story they already know, and others will shun away from it because they do not like change. The story of “Jack and the Beanstalk” has a basic enough plot line that is well known that it was easy to add more details and characters to it, without altering the main plot line. The film Jack the Giant Slayer is very entertaining, has just the right balance of action, comedy, and romance, and contains many surprising twists. While it brought in revenue of almost $120million, it cost $195million to make, so it has not broken even. The film came out in a difficult time, because other great action films, such as Oz the Great and Powerful, were released around the same time. Despite the revenue, the film is a great take on a classic fable that should have been seen by as many people who have read the original fairytale. 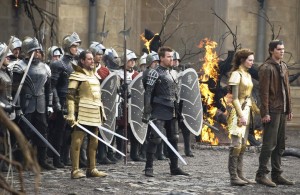