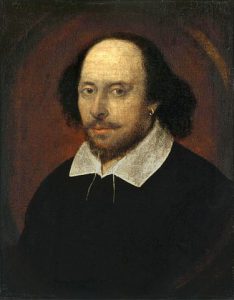 If you’ve ever been in an English classroom, you’ve most likely read a play or two by the one and only William Shakespeare. You probably know that he also wrote a series of sonnets that are still used today to woo literary hearts. What you may not be aware of is the mystery that surrounds him that clings like a mist.

Some speculate that Shakespeare was multiple people using a common pseudonym, and some even doubt his existence all together, though this has been disproven, it gives him a myth-like quality. So, on his birthday, April 23, we’ll give you the straight facts about this famous playwright and his contributions to the literary world and the English language as a whole.

Even Shakespeare’s birthday isn’t concrete. Birth records didn’t exist in the late 1500s, but the records of the Holy Trinity Church in Stratford-upon-Avon, England show the baptism of a William Shakespeare on April 26, 1564. Historians assumed his birthday would have been three days previous, as was the societal custom. His father was a successful merchant, his mother was local landed heiress, and he had five siblings, but that’s about all we know about his childhood. 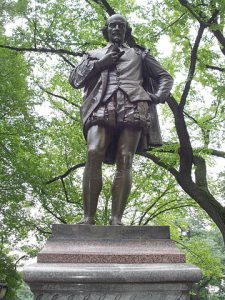 Hamnet and Judith. After the twins’ birth, all records of Shakespeare were lost until the 1590s. There is much speculation about what Shakespeare did during this time—some say he went into hiding for poaching game from the local landlord while others believe he was an assistant schoolmaster in Lancashire. We may never know for sure.

Later, evidence appeared of Shakespeare working as an actor and playwright in London in 1592. He was a partner in the Lord Chamberlain’s Men, an acting company, and garnered the attention of many nobles, including the Earl of Southampton, Henry Wriothesley. In the seven years that follow, fifteen of Shakespeare’s thirty-seven plays were published, and he and his partners built their own theatre, called The Globe, on the south bank of the Thames River.

As for his works, you’re probably pretty familiar with his tragedies like Romeo and Juliet, Hamlet, and Macbeth, but Shakespeare had a wonderful sense of humor which can be found in his comedies, including A Midsummer’s Night Dream, The Merchant of Venice, Much Ado About Nothing, and my personal favorite, The Taming of the Shrew. These story lines are still used as inspiration in modern storylines in movies and books. Shakespeare also has an impressive collection of poetry, mainly sonnets, that tell a story when read all together. Not to mention that he invented more than 1700 of our most common words in English today by simply

changing nouns into verbs, verbs into adjectives, and adding prefixes and suffixes to change the root word. Some of these words include hobnob, discontent, circumstantial, flawed, radiance, moonbeam, and obsequiously.

To this day, scholars argue over William Shakespeare’s true identity. The Shakespeare Oxford Society even asserts that English aristocrat Edward de Vere was the true author of these plays, claiming the William Shakespeare from the church records was not educated enough to produce such revolutionary and timeless pieces. This opinion, however, is the in the minority.

Regardless of identity and history, William Shakespeare wrote plays that truly transcend time. By focusing on the matters and follies of the heart and human experience, he created an arsenal of literary genius that will be sure to entertain literary minds for generations to come.

First Line Friday: “The little girl throws her head back and laughs.”

First Line Friday: “The entire class was excused after the announcement that a storm would hit the city.”

View all posts by Cassidy Webber →