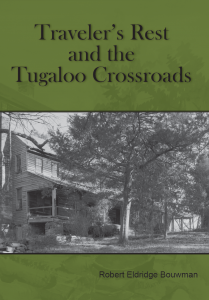 In 1964, Traveler’s Rest, an old inn on the Georgia side of Lake Hartwell, officially became a National Historic Landmark. The inn deserved the title, as it is strongly steeped in history; in fact, it will celebrate its 200th birthday this year! The land surrounding it, previously known as Tugaloo, has a rich past as well, with records dating back to its 16th century’s Native American residents. To honor this inn’s remarkable heritage, Robert Eldridge Bouwman wrote and compiled a history of the area. His book, titled Traveler’s Rest and the Tuagloo Crossroads offers a comprehensive account of all facets of Traveler’s Rest and the surrounding area.

Bouwman’s history closely follows Traveler’s Rest as it is passed from one family to another. Before being expended into the more modern inn whose reconstruction still stands today, Traveler’s Rest was a small cabin. As time passed, the cabin evolved into a simple house that would eventually become the inn. James Wyly built the house along the Unicoi Turnpike, the area’s main trading route, which gave the house the perfect opportunity to succeed as a respite for weary travelers.

This history covers the past 300 years in incredible detail. Bouwman pays specific attention to the families who settled on Traveler’s Rest’s land: the Waltons, Wylys, Martins, and lastly, the Jarretts. Nationally significant events, like the Revolutionary and Civil Wars, are emphasized equally with the minutiae of the families’ daily lives. Bouwman’s inclusion of firsthand accounts from the residents and visitors of Traveler’s Rest gives its history a very personal feel that allows readers to personally connect with the families and their lives. For instance, private correspondence between the Jarrett family members is included, and touches down on such topics as their health, courtships, and affection for one another.

Traveler’s Rest now stands six miles east of Toccoa, Georgia, and functions as a house museum. It is open to the public, and is a must see for any tourists in the area. It contains genuine period furniture and artifacts, most of which belong to the late Jarrett family. To visit the house now, according to Bouwman, is to “step back in time to the days of stagecoach, roadside tavern, and pioneer living.” Reading his history is a wonderful way to introduce Traveler’s Rest to any prospective visitors, and it perfectly complements the inn itself.

View all posts by Julie-Anna Homeyer →