Jillian Murphy
706-864-1556
jillian.murphy@ung.edu
British Literature I Anthology: From the Middle Ages to Neoclassicism and the Eighteenth Century
University of North Georgia Press, April 30, 2018

Dahlonega, GA—The University of North Georgia Press is pleased to announce the release of our latest Open Education Resource: British Literature I: From the Middle Ages to Neoclassicism and the Eighteenth Century, out April 30, 2018.

Featuring over 50 authors and full texts of their works, this anthology follows the shift of monarchic to parliamentarian rule in Britain, and the heroic epic to the more egalitarian novel as genre. Edited by Laura Getty, Ph.D., and BJ Robinson, Ph.D., the anthology offers historical, cultural, social, and aesthetic framing, paired with original Author Introductions, Reading and Review Questions, and Key Terms. A forthcoming ancillary will be supported by open-enabled pedagogy, allowing readers to contribute to the project. 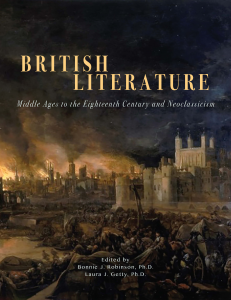 British Literature I: From the Middle Ages to Neoclassicism and the Eighteenth Century (978-1-940771-28-1) releases April 30, 2018. Print copies can be bought through Ingram, Amazon, and other major retailers for $49.99. Free digital copies can be downloaded from the University of North Georgia Press homepage at www.ung.edu/university-press.