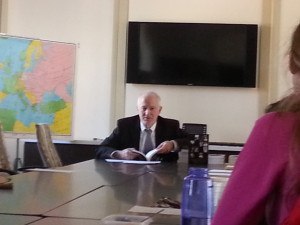 Thursday, March 7, the University Press held a book signing and reading of Poetry Facing Uncertainty by Gordon E. McNeer. This collection of poems consists of eleven of the newest popular Spanish-language poets who have had their works translated into English. These poets are from various Spanish-speaking countries including Spain, Argentina, Columbia, El Salvador, and others. This collection was originally published in Spain, and has been published in several other Spanish-speaking countries like Argentina.

McNeer opened the reading with an explanation as to why he decided to create this collection of poem translations. He stated that he had previously translated five collections of poetry by Spanish speaking poets such as José Hierro and Benjamín Prado, and in doing so built relationships several other poets. 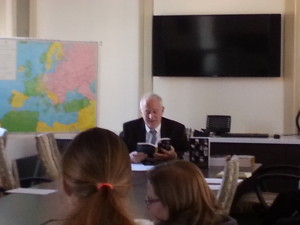 He then began reading a poem by each of the eleven poets. Some poems included “Roadhouse” by Federico Diáz Granados (Columbia), “Why We Want to Be William” by Carlos Aldazábal (Argentina), and “Change of Plans” by Daniel Rodríguez (Spain). He provided background information on each of the poets and the selected poems. “Of My Grandfather” by Ana Wajszczuk (Argentina) describes her experience of discovering the fact that she has Polish heritage at her grandfather’s funeral. In the poem, she explains that she realized this based on the name he was given by her other cousins in a language she did not understand.  He even read one of them in both Spanish and English, upon request of one of the attendees.

The reading was followed by refreshments and autographing session.

The first diary entry in 1,271 DAYS A SOLDIER was