Originally I’d planned to review Lackadaisy today (it seemed like a good follow-up to last week’s), but then on Monday, my day off, I finally got around to reading A Game of Thrones, the first book in the series A Song of Ice and Fire. All eight hundred pages of it, because I don’t own a bookmark and there’s a special circle of Hell for people who dog-ear their novels. Oh, and because it’s a good story, I guess. I knew that already from watching Game of Thrones, the HBO adaption (I’m thinking the titles are going to get a little confusing, so I’ll point out whether I’m talking about the show or the book). So, I figured I’d take a break from webcomics (hell, I might even review the whole series for the next few weeks if I can get my hands on the rest of the books—I might even buy a few) since I technically work for a publishing company and whatnot. If I went much longer without reading something in traditional print, I’d get my literature nerd card revoked.

I watched Game of Thrones (the show) over the summer, so I knew how A Game of Thrones (the book) was going to go. George R. R. Martin (the writer) helped produce the HBO series too; except for a few short scenes, you (the audience) could pretty much follow along chapter-by-chapter with each episode. I (the reader) like that, since it makes it easier to compare the two. And having compared them, I—and believe me when I say it’s hard to say this, because I’ve only done it once before with The Princess Bride—prefer the show. When I’m done strangling myself, I’ll have to ask April (the boss) what she thinks. If any of you (still the audience) have an opinion on the matter, feel free to chip in, here or on our Facebook page.

I guess I don’t feel too bad about liking the show better, since Martin wrote it too. If anything, it’s like he treated it as another editing opportunity. Some unnecessary bits got clipped, better dialogue was added (some of the best lines are only in the adaption, not the book [“What do we say to the god of death?”]), and a few characters were more fully defined. A certain queen, for example, is both scarier and easier to relate to in the show. Don’t even get me started on Tyrion “Just Ignore My Physical Description Because You Can’t Imagine Me as Anyone Other Than Peter Dinklage” Lannister; he’s great in the book, but Dinklage took the character and ran with him all the way to the award ceremonies. I can only assume that the next book Martin writes will be titled Tyrion and Some Other People. 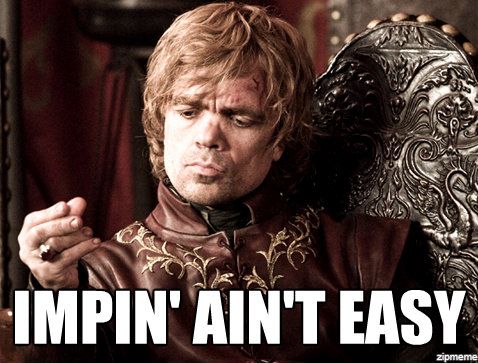 The acting in general is just awesome, and a good thing, too, since I wasn’t always happy with the emotional reactions of the characters in the book. Sometimes they’re weirdly quick to move on when something surprising or bad happens, or they lack a physical description to go with their dialogue, so it doesn’t always feel real or it’s hard to picture their reaction in your head (not always, but sometimes). A great, believable cast in the show fixes those problems.

I should probably say what the story is about in the first place, shouldn’t I? It’s so popular now that I kind of assumed everyone has at least a general idea. Anyway, A Song of Ice and Fire is a fantasy series, rather on the dark side and big on realism. Main characters can and do die, and if you don’t get to star in at least one chapter, I hope you’ve written up a will. Many subplots intertwine as different factions and characters scheme for power (hence the title, A Game of Thrones). We don’t have to keep up with so many people that it gets confusing, thankfully; Martin picked about the right number of different camps to follow so that everyone gets enough screen time and we don’t forget about anybody important. I like seeing what the different sides are doing and thinking; almost every side has someone you want to see succeed, or at least survive. That adds a very nice extra element of worry to watching the conflict—and believe that there’s a lot of conflict. Things start off relatively calm, at least for most characters. Then a chain reaction of decisions (some of them smarter than others) sends it all crashing down, and as of the second HBO season (which I assume takes up book two, if the first one is any indication), the characters are still too busy smashing the pieces into smaller shards to bother picking any of them up. 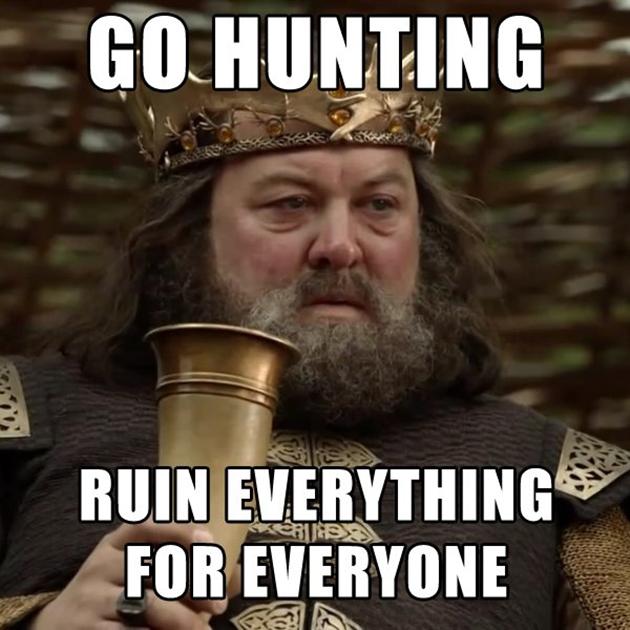 Like most fantasy, there’s a lot of background information to absorb. Piles and piles of it, especially in the book, but it’s generally manageable. Even if you don’t remember all the names of the characters, their ancestors, their houses, their favorite heroes, their lands, their traditional friends and enemies, their mottos, their families’ histories, and their favorite colors (I can’t, not just from memory), the story doesn’t really suffer for it. You can still keep up with what’s going on and who hates whom (April keeps telling me we’re dropping that word, and I’m sure it’ll die off soon, but I spent so long trying to learn it that I’m stubborn about letting it go), at least as it applies to the major players. An appendix at the back of the book describes the great houses, their members, and their sayings, and if that’s not enough, just read/watch with Wikipedia open. Besides, most people who’re into fantasy are already used to memorizing an encyclopedia for each new series they pick up.

On a small side note, while I’m talking about fantasy as a genre, the magic in the books is among my favorite. The people who use it either have only one or two tricks that they put to great use (the Faceless Men, shapeshifting assassins, have a special place in my heart; I could’ve smacked a character who turned down the chance to join them in the second HBO season. She had family, friends, and a home to think about, I guess, but come on: shapeshifting assassins) or a whole bag of toys like traditional wizards, every one of which demands a dark and bloody price. This gets rid of the common fantasy problem where there’s no good reason why a few magicians couldn’t get together and throw near-divine spells at every plot problem until it turned to dust. You really mean to tell me you’re sending six guys with swords to save the world when you’ve got Merlin over there bending space and time to eat his breakfast before he cooks it (if you know where that’s from, then rest assured I’ll review the webcomic before I’m done; if not, pretend I came up with it on my own)?

Another side note: fantasy language is in full effect. You know, archaic things like “breaking my fast” instead of “having breakfast.” Martin is a big fan of such things, as are a lot of fantasy writers and readers. Personally, I think it’s either distracting or funny, depending on the day. I can’t say it’s a style I’d choose either way, but I wanted to mention it for people who feel the same and for people who like it; the second group will just find something else to enjoy here. I guess it does add to the theme, since the narrator is in on the joke too; it’s not limited to dialogue. If you’re like me and you prefer more modern language, my advice is to make a drinking game out of the number of times you read “wench” to make it fun again. You definitely shouldn’t pass up the great plot and characters just because hardly any chapters pass without someone saying “m’lord.” The show cuts back a bit in this area, though.

And now, disclaimer ahoy! A Game of Thrones, and A Song of Ice and Fire in general, are very adult, but still not as adult as Game of Thrones (the HBO adaption). The reasons overlap a lot; the show doesn’t add anything new, but rather cranks it up to eleven. Good luck finding an episode where someone isn’t covered in blood, naked, or both. Profanity is also a lot heavier in the show, not that the book spares it much either; in exchange, the show ages many of the characters. As I said, Martin went for fantasy realism, which means that most people are engaged by twelve, married by thirteen, and pregnant or leading armies by fourteen. We even get adult concepts, like how life is inherently unfair and at least half luck, what constitutes justice, and whether it’s better to do the smart thing or the honorable thing. I’d be just as wary of letting children wrestle with those problems as I would be of letting them watch a guy sleep with his sister and then push a kid out of a tower window in the same scene (spoiler alert).

Assuming you’re ok with all that (if HBO’s success in general is any indication, a lot of people are), I recommend the book. However, I recommend watching the show first. The first season’s got to be for sale by now, and if it isn’t, find a friend who has HBO GO. You could even do an episode and then read the chapter associated with it, going back and forth until you finish both the first season and the first book. Either way, you’ll be able to put a face to the names (good because Martin is better about describing clothing and food [both done very vividly, by the way, to the point that you might not want to read it if you’re on a diet] than most characters), hear those names in the first place (good because the more fantasy-sounding ones are tough for me, at least, to remember or pronounce in my head until I’ve listened to them), and get access to the plot faster than you could with the book, to see if you like it. Because the plot is the best thing about it to me. The way the different substories intertwine and motives clash, alliances and feuds forming, changing, and breaking—that’s what makes this series good for me. The rest of the details are just that—details. Well, except for Tyrion. If he got his own spin-off, I’d read/watch the hell out of that, other characters be damned.

See you next week.