A quarter of a century ago, Saddam Hussein was given the ultimatum to peacefully withdraw troops by January 15, 1991, from Kuwait before the United States and our allies took lethal action. Hussein failed to comply and Operation Desert Shield became Operation Desert Storm, in attempt to swiftly bring an end to the war over the oil province in Kuwait.

Including commentary from the late Laurence Jolidon, Turn Back before Baghdad is a collection of firsthand dispatches from American and British correspondents in the thick of the action. Their accounts include eye-witness battlefield reports, descriptions of tragic friendly fire episodes, and colorful and humorous insights into how American and British soldiers lived on the frontlines. 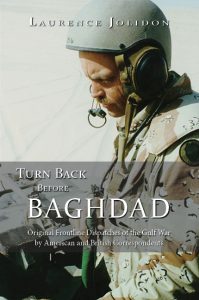 Turn Back before Baghdad is filled with the excitement and emotion of life among soldiers preparing for, and engaging in combat. Read it to experience various daily accounts of Operation Desert Storm and learn intimate details from the soldiers and civilians who lived through that pivotal moment in history. The University of North Georgia Press is honored to announce our April 18, 2017 release of Turn Back before Baghdad, a true and commemorative account of Operation Desert Storm.

Celebrate the 246th birthday of the U.S. #Army wit

Be creatively inspired with these writing prompts

What are you reading this summer? Featuring #TheN

Be creatively inspired with these writing prompts