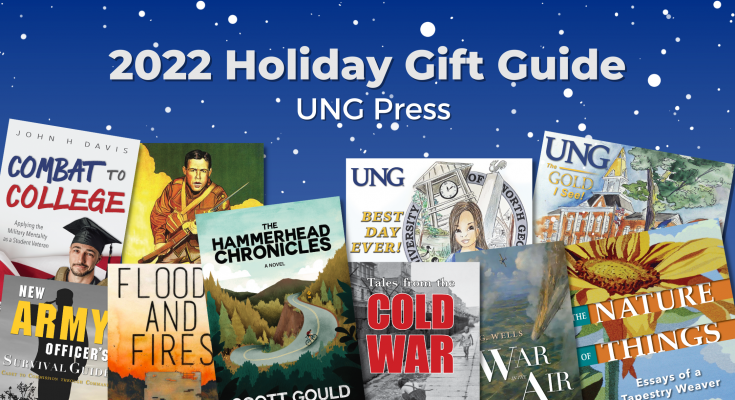 It’s the most wonderful time of the year! We’re here to help you check off your gift list early so you can relax, cozy up with a good book, and enjoy the holiday season. Here are twelve UNG Press favorites that make perfect presents for the readers in your life.

For Future Nighthawks and UNG Alumni

Share your favorite memories of UNG with the whole family! Plus, support your alma mater this giving season: profits from these two picture books authored by UNG President Bonita Jacobs fund student scholarships!

UNG The Gold I See: The Legacy of UNG’s Dahlonega Campus
Benjamin Smith, his daughter Jamie, and grandson Tommy each have a different goal during Visitor’s Day at UNG’s Dahlonega Campus. The grandfather wants to recall the memories of his years in the Corps of Cadets. The mother wants to remember her years in the nursing program. And the grandson wants to find UNG Dahlonega’s legendary treasure: the gold hidden somewhere on campus. He has Nigel the Nighthawk and a treasure map to guide him; his grandfather and mother have the memories. What do you have?

UNG Best Day Ever!: The Legacy of UNG’s Gainesville Campus
Since he started school at the University of North Georgia’s Gainesville campus, Ana Green’s dad keeps talking about his best day ever. As the Green family prepares for the annual Starlight Celebration by touring campus and visiting Gainesville landmarks, Ana is determined to discover what makes a good day great. Will Ana make the Starlight Celebration the Best Day Ever?

For Artists and Nature-lovers

For the artists in your life, invite them to take a stroll through Appalachian trails and see nature through the eyes of North Georgia’s beloved tapestry weaver, Tommye McClure Scanlin. Her intricate tapestries capture the wonder and beauty of this world that so many of us take for granted.

The Nature of Things: Essays of a Tapestry Weaver
“I take so many things from this book and dip into it periodically for ideas, inspiration and courage. Above all, Tommye reminds us to look, observe, wonder, experiment and explore.” —Anna Wetherell, Tapestry Weaver magazine, British Tapestry Group

The Nature of Things weaves together a life full of happiness and sorrow. In these fourteen collected essays, Tommye McClure Scanlin reflects on her artistic journey and how crafting and life are interwoven, two threads that comprise a larger picture. Readers will find themselves lost in Scanlin’s full-color tapestries and comforting writing style as they explore the natural fields and woods of southern Appalachia.

For Fiction Readers and Southerners

Looking for a great book for the fiction-lovers on your list? Gritty, oddball casts of characters confront their pasts and seek to reclaim their futures in these soul-stirring books by Southern authors.

The Hammerhead Chronicles
“Deft and engrossing . . . a luminous weaving of fate and will, grief and desire, which sheds light on the families to which we’re born, the families we make, and the families we find along the way.” —Taylor Brown, author of Wingwalkers

The latest novel from critically acclaimed Southern storyteller Scott Gould, The Hammerhead Chronicles explores the effects of grief, racism, homophobia, revenge, love, and loss on an oddball cast of contemporary characters in a small, fictitious South Carolina town . . . oh, and it’s funny. On the day Claude slaps down a credit card for an expensive racing bicycle, his soon-to-be-ex-wife passes away. As Claude begins a quest to pedal away from his marriage and his grief, we encounter the Southern eccentrics that orbit his world.

Floods and Fires, the first collection of stories by Dan Leach, tests Marilynne Robinson’s assertion that “Families will not be broken.” Wrestling against limitations that are Southern in aesthetic but universal in nature, the characters in Floods and Fires seek redemption in the face of hard times. Quirky, outlandish, but in the end emotionally poignant, Dan Leach’s stories follow imperfect people struggling against their circumstances, their histories, and, most importantly, themselves.

For Cadets and Student Veterans

Gift a cadet entering the ROTC or a veteran returning to college a guide to make their transition to higher education a positive, successful new beginning.

Combat to College: Applying the Military Mentality as a Student Veteran
“A slim and motivating volume for veterans about to head off to school.” —Kirkus Reviews

Combat to College is the guide for student veterans who want to win the college battle. Utilize the unique skills and discipline you gained in the military to succeed in higher education. In ten straightforward lessons designed by a veteran for veterans, you will learn how to navigate the transition to civilian life, build your team and resume, work with political professors, and endure to graduation. Maintain your military bearing and unwavering determination in your next chapter. Make your college success nonnegotiable. You’ve earned the GI Bill, and now it’s time to grit your teeth and use it.edd

Know a veteran or history buff who likes to explore our military past? These first-hand accounts offer intimate reflections of life in command and on the frontlines.

Tales from the Cold War: The U.S. Army in West Germany, 1960–1975
Tales from the Cold War is one man’s memoir about his service time in Germany during the Cold War. Colonel Michael D. Mahler (Ret.) first went to Germany in 1960. At the end of his service, he spent over a decade in Germany, raised his family there, and commanded the 3rd Armored Division’s cavalry squadron at Büdingen. In his memoir, Mahler reflects on the lessons from the senior leaders of World War II, the building of the Berlin Wall, and the unique challenges that come with command.

1,271 Days a Soldier: The Diaries and Letters of Colonel H.E. Gardiner as an Armor Officer in WWII
1,271 Days a Soldier is one soldier’s record of the Second World War. Henry E. Gardiner’s collection recalls the first-hand experiences of an operational level ranking officer from the prelude of war to fighting in the African and European theaters, from the shock of the initial volley of violence during the December 7, 1941, Day of Infamy radio broadcast to the final days of the war while operating on the soft underbelly of Hitler’s Europe. 1,271 Days a Soldier is written with all the emotion of someone who endured nearly four years of high-intensity conflict coupled with long periods of boredom and interjected with periods of frivolity.

For those family and friends who need a few classics to add to their military history bookshelves, these titles have been read and enjoyed by millions over the past century.

The War in the Air
H. G. Wells’s foreboding futuristic novel was published in 1908. Much of his work discusses human nature in the face of warfare and includes many technological developments before they existed. This 100-year-anniversary reprint edition remembers a world before aircrafts ruled the skies. Edited by H. G. Wells-scholar Aaron Worth, this reprint includes an introduction as well as additional reading recommendations.

The Secret Battle
Originally published in 1919, The Secret Battle honestly portrays the mental horrors World War I inflicted upon soldiers. Harry Penrose is an Oxford student who enlists in 1914. He’s hard working, modest, and dutiful but struggles to cope with the toll of war. During the Battle of Gallipoli, Penrose seeks refuge to avoid shellfire, but another officer sees him and accuses Penrose of desertion. Court martialed and branded a coward, Penrose is betrayed by the very system for which he fought.

Over the Top
Arthur Guy Empey served as an American in the British Army in the early days of World War I. After fighting in the trenches, Empey began writing short stories of his overseas military experience. Wounded in the line of duty and discharged soon after, Empey returned to America and compiled his stories into one volume entitled Over the Top. Published in 1917 only weeks after the United States declared war on Germany and the Central Powers, Over the Top quickly became a bestseller, bringing fame and notoriety to the previously unknown author. 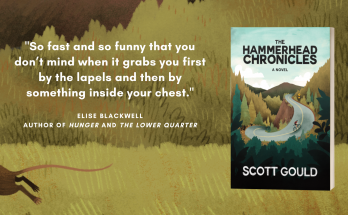