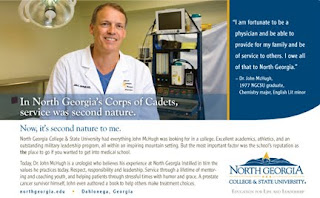 For years, alumni and faculty have considered North Georgia College & State University as the state’s “best kept secret.” However, research conducted as part of a new institutional marketing campaign indicates that the university has greater “top-of-mind” awareness than the University of Georgia and Georgia Tech, the state’s flagship institutions, in three nearby counties.

A phone survey of 500 people was conducted in mid-October, with 39 percent of those surveyed living in Forsyth County, 55 percent in Hall County and 6 percent in Dawson County. The sample sizes were determined by the population size of each county.

In the survey, when asked to name colleges and universities in the region, 47 percent of the respondents mentioned North Georgia, as compared to 40 percent for the University of Georgia, and 31 percent each for Gainesville State College and Georgia Tech. Additionally, 67 percent of those questioned had a favorable opinion of North Georgia and 64 percent believed the university had a strong or moderate impact on their communities.

These positive numbers came from a group who included very few alumni — only 10 percent of the 500 people surveyed had attended North Georgia.

While people in neighboring counties are aware of North Georgia, their knowledge of the school seems to be just general. A little more than half of those surveyed — 51 percent — could not name any programs at the university. Of those who could identify programs, 27 percent mentioned ROTC or military and 13 percent said pre-med or nursing — the only programs at the school with double-digit response.

“Respondents had a high awareness level and favorable opinions about North Georgia, but only a small percentage felt very familiar with its programs,” said Kate Maine, director of university relations. “As we try to generate external support and financial resources for the university’s mission, it’s important that we build familiarity with and affinity for the university.”

The marketing campaign, sponsored by the NGCSU Foundation, is being conducted throughout Northeast Georgia to help individuals and organizations throughout the region understand the impact and the value of the university and its alumni in their communities. The advertisements are unified by the university’s seven core values of loyalty, integrity, courage, service, wisdom, truth and respect.

“This initiative highlights the university’s strategic vision of education for life and leadership in a global community by featuring alumni who demonstrate the university’s core values in their daily lives,” Maine said.

The university has undertaken several initiatives in the past two years to enhance communication with alumni and increase its visibility in the region. Included in these efforts are new print and electronic publications, a Facebook Fan Page, and a new website – http://www.northgeorgia.edu/.

“We have retired ngcsu.edu and adopted a domain name that better identifies the university as it is known by its constituents and the community,” Maine said. “Additionally, a similar virtual community for alumni and donors has been established at www.northgeorgia.org.”

What Does Getting Your MBA and the Release of Stranger Things Season Two Have in Common?