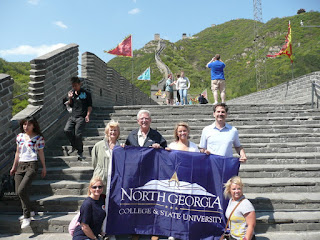 My China Experience
By John-David Rusk

From the outset of my MBA journey I wanted to participate in an international experience as part of the MBA program. While my initial desires were to go to Europe for an MBA class, I eventually, and apprehensively, decided on a two-week trip to China for the class “International Perspectives in Industrial Management.” I felt apprehensive because thoughts of China conjured up worries of communism, human rights violations, and other negative aspects so often presented in news segments of this distant land. My worries were allayed instantly upon arrival in China when we were greeted by pleasant, smiling, happy Chinese people who were truly excited and pleased to see and meet Americans.

While Americans in general are popular in China I had never witnessed the true sensation of celebrity until I traveled to China with my blonde wife and joined up with the rest of the group that included several other blondes. It soon became a common occurrence to have Chinese men, women, teenagers and children suddenly and unexpectedly grab the arm of someone in the group, usually one of the blondes, then turn to their accomplice and smile for an impromptu photo opportunity. The first time this happened it shocked and scared the members of our group but this soon became a regular, accepted experience. Once, when a young Chinese lady approached my wife and asked, in perfect English, “Are you American?” we thought she wanted to ask a question. When my wife replied that she was American, we were genuinely shocked when the young lady simply turned around, jumped in the air and hollered “YES!” then walked away. No additional questions. No conversation. No photograph. She was simply thrilled to have met an American.

While the language difference created a slight communication difficulty at times, it was not the problem I thought it would be. As it turns out, there are more English speaking people in China than there are in the United States. In China, the English language is now taught as a mandatory subject beginning in primary school. Navigation was not a problem either, as most business signs and street signs are in both Chinese and English. Since nearly every Chinese person wanted us to help them practice their English skills, we nearly had to make them teach us a few Chinese words.

The biggest differences were the cultural differences that influence the very foundations of human interaction. Unlike English, the Chinese written language characters represent words not letters. The absence of individual letters precludes the use of a dictionary, because to lookup a Chinese word one would have to already know the unique character. Without a common dictionary to define a widely accepted meaning of each word the Chinese culture could not develop the use of written contracts as each person could interpret each word to have a different meaning. Without enforceable contracts, business dealings were largely limited to close personal contacts where mutual trust was built over time through increasingly larger deals. This concept representing the individual personal investment put into each business transaction is what the Chinese call “guanxi.”

Exposure to such a different environment is part of what makes the experience of this trip to China unique. The opportunity to visit a culture thousands of years in the making, to see ancient Shang-dynasty oracle bone writings over 3,000 years old, to view beautiful breath-taking vistas from the Great Wall, all while earning college credit was a thrilling and unparalleled educational experience. If you are planning to step outside of your comfort with an international study abroad class don’t just tiptoe outside your comfort zone with a trip to a foreign country largely similar to the US, take a big step to the other side of the planet and experience a wonderful culture vastly different from your normal routine. I am so incredibly glad I had the opportunity to visit China. It proved to be a real “once in a lifetime experience!

What Does Getting Your MBA and the Release of Stranger Things Season Two Have in Common?