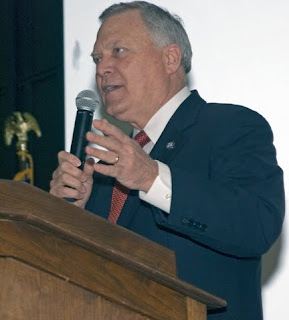 “I think it will be the kind of instrument that will provide local communities the broadband network that they need to be able to compete in this global economy that we’re all engaged in,” Deal, pictured below, said. “Infrastructure of this sort certainly is one of those critical tools that we have to have and I commend those who have been a part of this process from the beginning to have the inspiration, the idea to put it in place and those who have participated in making it work.”

The $42 million North Georgia Network project is funded with $33 million from the American Recovery and Reinvestment Act and $9 million in matching funds from the OneGeorgia Authority and other private and public entities. The university will be a hub on the network, a 260-mile regional fiber optic network connecting 12 counties. The network, which begins construction next week, will help bring jobs to the region, Deal said.

“I think all of you know that job creation is truly the greatest need that we have in our state and it doesn’t matter where you are in the state of Georgia, that is truly the most important thing that is on our plate, both at the state level and at the local government level,” Deal said. “What you’re hearing today and what you’re participating in as a part of this process is one of those additional tools that I think is important for us to be able to attract new industry and to be able to expand additional ones that are already here.”

Wednesday’s summit, “Technology for Business and Economic Growth,” featured speakers who talked about how technology can be used to fuel business growth and economic development.

The first phase of the network, which will install a main fiber optic “trunk line” on utility poles throughout the 12-county region, is expected to be completed by the end of the year. That phase has been designed to connect hospitals, schools, government and public safety facilities, and universities like North Georgia to a broadband network that will be among the fastest in the world.

“This will be a tremendous, tremendous tool for all of north Georgia. I want you to think about the opportunity that we have,” Nancy Cobb, executive director of the One Georgia Authority, told the government officials, business owners and economic development officials at Wednesday’s summit.

Cobb believes the North Georgia Network will bring the same kind of excitement to local businesses that consumers often have over the latest electronic gadgets.

“We have the same opportunities here in north Georgia to build that kind of excitement and to bring those kinds of technologies and those kind of brainy people here to create a robust, 21st-century, knowledge-based economy,” she said. “I just want you to think about where you can take this region of the state if you’re willing to invest in it and to support the technology that the state, federal and local governments are bringing to the state.”

In his lunchtime address, Deal also talked about the changes to the HOPE program that he signed into law earlier this week, and the need for additional training in STEM subjects — science, technology, engineering and mathematics. Added to the HOPE program was a low-interest loan program open to all majors, which includes an incentive for students to choose STEM subjects. One year of loan payments will be excused for each year a student teaches a STEM subject in a Georgia school, Deal explained.

He closed his lunchtime speech with praise for North Georgia.

“Let me thank those here at North Georgia College & State University for the great job they continue to do. This is one of the premiere institutions in our entire educational network. We’re proud of what you do here, we’re proud of the young men and women that you produce and we’re proud of the fact that so many of them remain in our state.”

Below, a helicopter carrying Gov. Nathan Deal, state Sen. Steve Gooch and others lands on campus prior to the governor’s lunchtime speech.

Bringing Technology Speakers to the Classroom