Skip to content
UNG welcomed back hundreds of alumni April 22-24 for reunions, ceremonies and other special events at the 2016 Alumni Weekend in Dahlonega.

One of the many events held over the weekend was the North Georgia Dahlonega Alumni Shared Interest Group (SIG) Awards Luncheon to recognize outstanding students and alumni for dedication and service to the university and the community.

The Distinguished Professor Award was presented to Dr. Victoria Hightower, assistant professor of history. She was hired in 2011 after receiving her doctorate in Middle East history from Florida State University. Her publications focus on the history and heritage of the pearl trade in the Persian/Arabic Gulf and the politics of restoration in the United Arab Emirates. In 2013, she received a UNG Presidential Summer Scholar Grant to conduct research on Persian/Arabic Gulf piracy in the British Library India Office Records.

The Young Alumnus Award was presented to 1LT Michael Rose,‘11, of Fort Lewis, Washington, in recognition of his outstanding military career. After commissioning, Rose and his wife Abbie moved to Hawaii, where he became a rifle platoon leader. In 2014, Rose and his partner John Bergman won the Best Ranger Competition. Rose now serves as a Ranger platoon leader in the 75th Ranger Regiment, and plans to one day become a Ranger instructor.

Mac McConnell, ‘79, received the Distinguished Alumnus Award for his extraordinary record of service and support to UNG. He has been employed by UNG since 1987, and he serves as senior vice president for business and finance. He has also served as president of the Dahlonega Rotary Club, The Dahlonega Jaycees, The Lumpkin County Touchdown Club and the North Georgia Athletic Association. He currently serves on the UNG Foundation, and this past fall he was awarded the Judy Wilder Lifetime Achievement Award by the University System of Georgia Board of Regents’ Office of Facilities.

The Alumni Hall of Fame Award was presented to MG (Ret.) Jim Cravens, ‘66. After graduating as a distinguished military graduate with a Bachelor of Science, Cravens went on to Clemson University to earn a Master of Science. He served 32 years of active duty in the U.S. Army, culminating in his role as Commanding General of the U.S. Army Air Defense Artillery Center and School in Fort Bliss, Texas. He received numerous awards and decorations for his service. After retiring from the Army, he served in the defense industry for 11 years, including his position as director for PAC-3 International Business Development at Lockheed Martin Missile and Fire Control in Dallas, Texas.

The Ralph Colley Spirit of North Georgia Award was presented to Capt. (Ret.) Cameron West of Acworth, Georgia. This award is given to an alumnus who has experienced adverse circumstances to live an exemplary life. West commissioned from UNG’s Corps of Cadets in 2008 into the U.S. Marine Corps, and, in 2010, he deployed to Afghanistan as an infantry platoon commander. He lost his right leg from an improvised explosive device during combat operations. He retired from the Marine Corps in 2013 and moved back to Georgia with his wife. 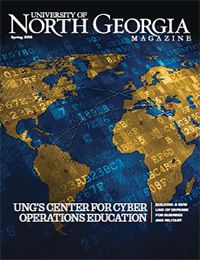