Skip to content
Michael Granberry, right, decided to direct “The Odyssey” during a lunch with Jim Hammond, left, chair of the theater department at UNG and artistic and managing director of GTA. Hammond’s first year with GTA was Granberry’s senior year.

When Michael Granberry was 8 years old, his father took him to see “The 7th Voyage of Sinbad.”The 1958 feature film combined real actors with stop-motion animation to create a fantasy tale on the island of Colossa and Sinbad’s homeland of Baghdad. The scenes with the mythical beings of a Cyclops, fire-breathing dragon, serpent woman, and a two-headed bird called Roc entranced Granberry.“My brain flew out of my skull,” the Athens, Georgia, native said.

Seeing this reaction in his son, James Granberry decided to educate his son in stop-motion animation.“He knew how to do it, so he showed me how to do it,” Michael Granberry said.

This early introduction to the niche film industry took Granberry on a winding career path that included jobs as an actor, director, production assistant, production accountant, and finally an Emmy-winning animator.

Granberry, who earned a Daytime Emmy Award for Outstanding Individual Achievement in Animation for his work on the Amazon Studios children’s show “Tumble Leaf,” said his foundation in acting and directing aided him in evolving into an animator.

“Those were the skills that ended up getting me hired by animation companies,” he said. “Because they can teach you to animate but not how to act or how to compose a nice stage picture or choreograph a dance number and do it with animated characters.”

Granberry put all of those skills to work as director of the Gainesville Theatre Alliance’s (GTA) production of “The Odyssey” in spring 2018. GTA is a nationally acclaimed collaboration of UNG, Brenau University, theater professionals, and the northeast Georgia community.

Being on UNG’s Gainesville Campus working with theater students and professionals is not new to Granberry. He earned his associate degree from UNG in 1989 and transferred to Brenau University, graduating in 1991. During all four of those years, he participated with GTA.

“GTA is where I came alive as a theater actor,” Granberry said.

Granberry recalled GTA being the first school from Georgia to be selected as a finalist for the 1991 American College Theater Festival at the Kennedy Center in Washington, D.C. During the opening-night performance, Granberry said he and his fellow actors got a surprise.

“A couple of our state senators were in the audience. After the show, the audience stayed for a Q-and-A. And one of them said would everyone from Gainesville, Georgia, please stand up,” Granberry said, pausing for a moment to control his emotions as he recalled the memory. “And 80 percent of the audience stood up. It was amazing.“That just goes to show no matter where you go, once you find your theater family, you are going to be OK.”

Like most students, though, Granberry moved to pursue his career. The journey led him to St. Petersburg, Florida; Wilmington, North Carolina; and now Sun Valley, California.

But like many, Granberry returns home now and again to visit family and friends. One such visit home proved fortuitous for him as well as GTA.
“(Michael) reached out and said he was going to be in the area and asked if I would like him to do a workshop,” said Jim Hammond, chair of the theater department at UNG and artistic and managing director of GTA. 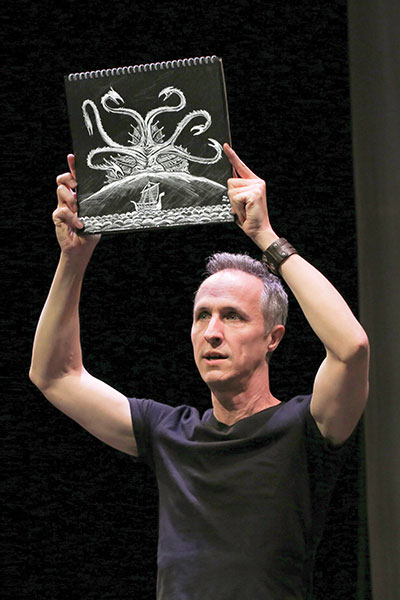 At that time, Hammond was selecting the next year’s productions.

“Jim came up with the idea (to do The Odyssey),” Granberry said. “That’s when my head swelled and I thought my skull was about to blow.”

Right then and there, Granberry agreed to direct the production.

“Michael had been winning all of these awards, so it was a no-brainer,” Hammond said. “And we learned recently he earned an Emmy nomination for directing.”
Granberry said, “the timing was perfect” because “Tumble Leaf” wrapped its season.

With the adaption of the play by director and playwright Mary Zimmerman in his hand and ideas in his mind, Granberry applied his knowledge of acting, directing and animating to “The Odyssey.”

One idea involved building puppets to represent characters, including the giant, Cyclops Polyphemus.

The professional animator, however, did not stop there. A large sea monster was figured into the play along with some smaller parts portrayed as puppets.
And Granberry couldn’t wait to get started.

“I’m looking forward to the collaboration with the technical team and the cast,” he said before rehearsals. “That’s the magic time.”
Hammond has seen the effect Granberry had on the students.

“Michael’s direction is both challenging and nurturing at the same time,” he said. “Students are excited by his dynamic vision and fast pace, yet they completely trust him and know they’re working in a safe and healthy environment.”

The bonus is Granberry’s story is an inspiration to the GTA students.

“There is nothing more joyful than seeing former students build successful lives, and Michael has achieved remarkable success both professionally and personally,” he said. “Bringing Michael in to guest direct with his impressive skill set is a highlight of the year.”