Skip to content
The Nighthawks earned a place in the national title game for the first time since 2015. The team will compete in the NCAA Division II Softball Championship May 24-28.

For the ﬁrst time since 2015, the No. 1 ranked UNG softball team headed to the NCAA Division II Softball Championship.

The Nighthawks earned a place in the national title game after coming from behind to beat Young Harris College, 2-1, on May 18 in the Southeast Super Regional at Haines & Carolyn Hill Stadium in Dahlonega, Georgia. With the win, UNG officially won the Battle of Blood Mountain for the ﬁfth-straight year.

On May 24, the Nighthawks headed to Salem, Virginia, for the 2018 NCAA Division II Softball Championship. They broke a 19-game winning streak losing to Southern Indiana in the first round and to Saint Leo in an elimination game.

The team finished the season with a record of 62-4, the most wins in program history.

The Nighthawks graduated two seniors, Sydney Sprague and Brittany Gilliam, who finished their two-year UNG careers with a combined record of 110-17. 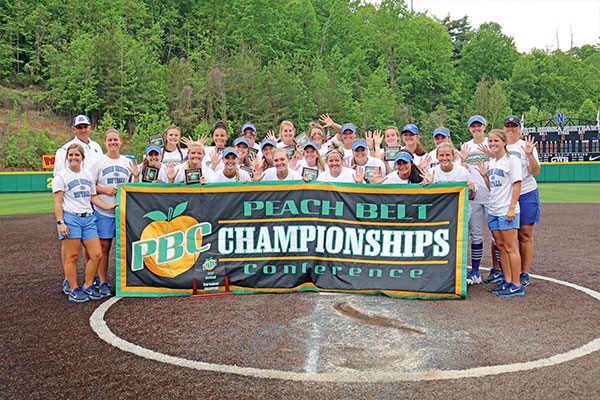 The No. 1-ranked UNG softball team won the Peach Belt Conference regular-season crown April 25. This is the fifth year in a row UNG has won the conference title.