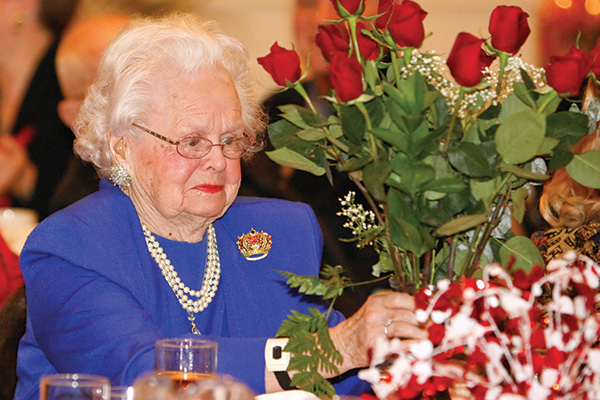 Cleveland, a former university trustee, was considered one of the UNG Gainesville Campus’ “Founding Mothers” by many for the work by her and her late husband, Ralph Cleveland, in helping to start the campus in 1964 as Gainesville Junior College.

The school was started after encouragement from the governor’s office and the University System of Georgia to address an urgent need for higher education in the community. The founding group included James E. Mathis Sr., Loyd Strickland, Jesse Jewell, James A. Dunlap, Raymond Sweetenburg, Ralph Cleveland, A.D. Wright, Otis Cato, and Charles Propes. The campus welcomed its first students in 1966.

Cleveland was dedicated to the school that she and her husband helped found, and attended every annual meeting of the college’s foundation since its establishment in 1967. In 2014, Cleveland attended a 50th anniversary celebration of the school’s founding just days after celebrating her 100th birthday.

The Clevelands’ dedication to the school included contributing more than $200,000 for scholarships and science building improvements. The Ralph and Mary Cleveland Ballroom in the Martha T. Nesbitt Building was named for Cleveland and her late husband and in 2000, the Computer Information Technology Laboratory was dedicated in memory of Ralph Cleveland.

Among the scholarship funds given by the Clevelands was the Ralph and Mary Cleveland Endowed Scholarship Fund to aid students with financial need and reward personal drive and initiative.

In 2005, Mary Cleveland was presented the Alumni Association’s Distinguished Service Award for her unwavering support of the school and her distinguished service in the community. In accepting the award, she recounted the historical community vote for the special educational bond on May 12, 1964, to establish then-Gainesville Junior College.

“When I heard the news that the bond had passed, I said to Ralph, ‘We won! We can have the college,’” Mary Cleveland said. “I have been for the college from the beginning and I always will be.”

Survivors include son and daughter-in-law John and Cathy and grandsons Michael and Scott and their families.