Skip to content
Make-A-Wish and the athletics department surprised Hope Nix and her family with a trip to Disney World.

Hope Nix and her family experienced many memorable moments Feb. 13 at UNG. The 5-year-old Dahlonega, Georgia, girl signed a one-day contract with the women’s basketball team and was introduced with the starting lineup.

Hope was also the star of the halftime show when three fairy princesses delivered her wish: a trip to Walt Disney World in Orlando, Florida.

The entire day was part of the Make-A-Wish reveal coordinated with UNG Athletics. Make-A-Wish arranges experiences described as “wishes” to children with life-threatening medical conditions.

Hope was selected as a recipient this year. She has aicardi syndrome, which is a rare genetic disorder characterized by the absence of a bridge connecting two sections of the brain.

UNG hosted the Make-A-Wish reveal after raising more than $10,000 this year to help grant at least one wish. It was the school’s seventh consecutive reveal. The university has raised at least $10,000 every year since 2010-2011, totaling more than $164,000 and equaling 16 wishes being granted.

Lindsay Reeves, director of athletics at UNG, said holding a Make-A-Wish reveal on campus has helped the student-athletes learn and value the importance of giving back to the community.

UNG athletic teams raised more money for the Make-A-Wish Foundation than any other NCAA Division II school in 2017-18, marking the third-straight year the school has been the Division II leader. 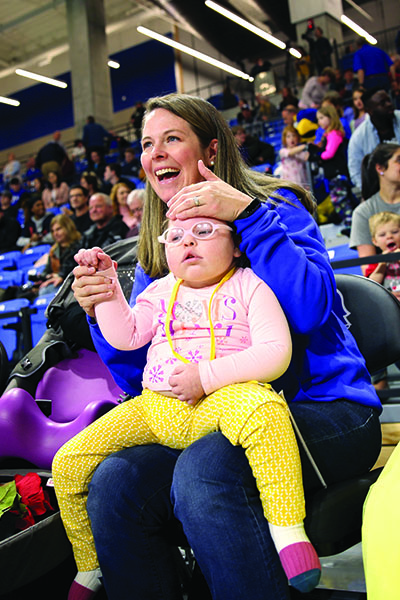