Skip to content
7The Cottrell Speaker Series is an opportunity for UNG students, faculty, staff, and members of the regional business community to interact with and meet business executives who are seen as leaders in their respective fields.

Since the Cottrell Speaker Series’ inception, the Mike Cottrell College of Business and each of its centers, the BB&T Center for Ethical Leadership, Center for Cyber Operations Education and Center for Entrepreneurship & Innovation, have hosted some of business and industry’s most reputable leaders.

“Presentations from business leaders merge management theory and practice together for our future graduates,” said Dr. Donna Mayo, dean of the Mike Cottrell College of Business. “The Cottrell Speaker Series, in particular, adds tremendous value to our students as they prepare for future careers. Hearing from and engaging with industry leaders is critical for our students’ professional development.”

During the 2017-18 academic year, students have had opportunities to hear from a number of leaders, including UNG alumni.

The most recent participant of the Cottrell Speaker Series was UNG alumnus and chief executive officer of Cici Enterprises William “Bill” M. Mitchell.

Mitchell is a seasoned restaurant operations executive with nearly 30 years of U.S. and global franchising experience. Prior to joining CiCi’s, he served in a variety of leadership roles at Dunkin’ Brands, beginning in August 2010. He most recently served as president of Dunkin’ Brands International at Dunkin Brands Group, Inc., and Dunkin Donuts LLC, where he was responsible for nearly 8,500 Dunkin’ Donuts and Baskin-Robbins restaurants in more than 60 countries around the world. Mitchell is widely credited with overseeing the turnaround of Baskin-Robbins’ domestic performance while driving best-in-class operations and customer service.

Prior to Papa John’s, Mitchell held various operations roles with AFC Enterprises (Popeyes), including the role of senior director of operations, where he led the acquisition of 81 Hardee’s restaurants, the largest acquisition in Popeyes’ 27-year history. Before entering the restaurant industry, Mitchell served in the U.S. Army. He received his Bachelor of Science degree from UNG in 1986.

We interviewed Mitchell during his visit to UNG for the Mike Cottrell Speaker Series.

How do you think your time at UNG prepared you for your career?

I think it was learning servant leadership, being in the Corps of Cadets, learning how to lead, follow, or get out of the way. It was about being in an environment where you got to know a lot of people very closely. The school was small but offered tremendous opportunities from a leadership perspective that truly prepared me for being a solid Army officer. Those principles that I’ve taken in military leadership I’ve applied in business.

And you’ve applied those principles everywhere you’ve worked in the business world?

I have. This mantra in corporate America –servant leadership – has been around UNG for a long time, and I’ve transformed that into really talking about how to own the minds, the hearts and the wallets of people and what that truly means to drive a healthy business and a healthy organization.

The CiCi’s brand isn’t as ubiquitous as say, a Papa John’s or Dunkin’ Brands. Do you have a plan to raise it to that level?

You’re right, if you look at the size of the CiCi’s brand it is not as well known as some others I have been involved in. But one thing I’ve taught teams over the years is to take on the tough jobs, because the easy ones are easy to get. CiCi’s is a brand that’s been around since 1985, with about 430 restaurants. I just left leading 9,000 restaurants in 61 countries, but this is a tremendous opportunity.

It’s more about the people, and we have an opportunity for growing the business, because we have significant capital.

I believe we can transform the entire brand into a new image in three years or less, and we can grow it very quickly. And, if we’d like to, we could buy another franchise through an acquisition to grow CiCi’s. This new job should be about fun; it should be fun and lucrative for everyone on the CiCi’s team. 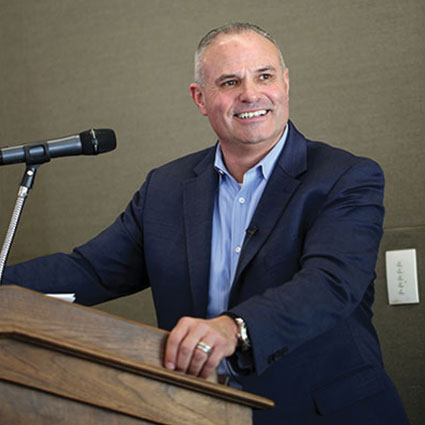 …learning servant leadership, being in the Corps of Cadets, learning how to lead, follow, or get out of the way.
– William “Bill” M. Mitchell

What message do you hope to leave with the students after your talk?

What I want to share is examples of leadership principles that I learned as a cadet and a junior military officer and how to apply those in corporate America. I’ll ask the students if they want to learn what it was like to run two publicly traded companies and deal with analysts on Wall Street.

One example would be about “owning the heart” of your guests, your constituents. When you’re running a company, you have a lot of stakeholders, and those stakeholders start with the consumer. Then it goes to the team, those who are serving, and at the end of the day, it’s about how to perform financially.

The last piece is the wallet. There are many military principles on that, but in the end, it’s about the bottom line. What I’ve been accountable for is three things: in-store sales, new units and earnings. Those three things have to act in concert to get premium value for your investors.

Are you going to be working in a restaurant at CiCi’s?

Absolutely—I already have, and I’ve passed the operational test that was given to me. There were operational procedures on how to make dough, how to make pizza, how to make pasta for the pasta bar. By all means, I’ll be running a restaurant to make sure what it’s like to function in one of our businesses. When I was at Dunkin’ I went to “Scoop School” and one of my proudest achievements was being named Top Banana by being the No. 1 graduating student. Scoop School was not easy, by the way, it was five weeks, with a lot of testing, but I did it because I wanted to run a Baskin’ Robbins restaurant. I thoroughly believe you need to learn the business from the ground up. I’ve held multiple departmental responsibilities, but nothing has been more important to me than running one restaurant.