Skip to content
Above: Retired Col. James T. “Tom” Palmer and his wife, Judy, are honored by Gov. Nathan Deal.

Retired U.S. Army Col. James T. Palmer will retire from his role as commandant of cadets at UNG at the end of June after 20 years in the role, making him the longest-serving Army ROTC commandant in the nation.

Palmer’s accomplishments and service include: a 75% increase in the size of the Corps of Cadets from 1999 through 2018; founding the Corps Advisory Council and the Corps of Cadets Alumni Network; supporting the deployment of cadets in the Georgia Army National Guard to Iraq and Afghanistan in 2004; and serving as interim vice president of student affairs at UNG.

“Few others have invested so much of themselves into the success of the Corps of Cadets and this university nor upheld so strongly the values of both,” said UNG President Bonita Jacobs. “I am thankful to Col. Palmer for his service to the university and his service to the nation during his distinguished military career. His legacy at this university will be long-lasting, and his presence and leadership will be missed.“

Palmer was honored Jan. 7 with a commendation from Gov. Nathan Deal to recognize his years of service to the university, the state of Georgia and the nation. Palmer said he was surprised and honored to be recognized for a second career that has been almost as long as his 26-year Army career. He is most proud of helping to grow the Corps of Cadets in both size and quality during his tenure. But what legacy does he hope to leave?

“That I had a small part in developing many highly educated leaders of character,” Palmer said. “My friends and colleagues will probably remember that I was always a proponent of academic achievement, that I favored professionalism over tradition, and that I expanded the opportunities for all cadets to serve others after graduation.”

Palmer is married to the former Judy Norris of Toccoa, Georgia; they have two daughters, Kristin and Meredith, son-in-law Justin, and one grandson, Jace. His awards and decorations include the Master Parachutist Badge, the Meritorious Service Medal, the Joint Service Commendation Medal, the Armed Forces Expeditionary Medal, and the Legion of Merit. 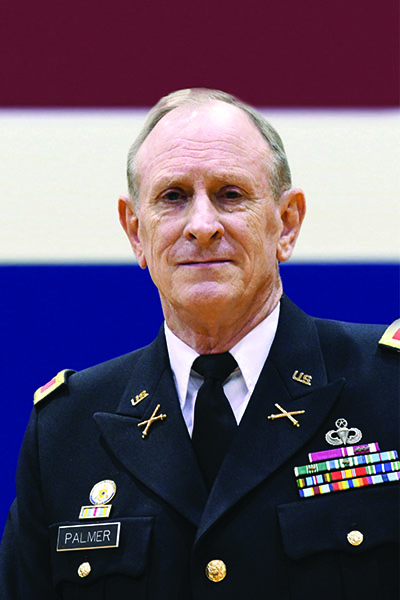 Col. Palmer’s 20 years as commandant at UNG makes him the longest-serving Army ROTC commandant in the nation.