Skip to content
Above: Gay Hammond, left in purple, and Jim Hammond, in gray, both alumni of Gainesville Theatre Alliance, now lead the program’s efforts.
For 40 years, the nationally acclaimed Gainesville Theatre Alliance (GTA) has entertained audiences from across northeast Georgia with its construction-savvy and technically gifted crews, professional directors and choreographers, innovative costume designers, and talented casts of students from UNG and Brenau University.

What started out as a theatrical experiment with a community theater group, a private university and a then two-year public college grew into a magical collaboration that has yet to be replicated anywhere.

“We have presented the GTA model at several conferences across the nation,” said Jim Hammond, head of the UNG Department of Theatre and GTA’s artistic and managing director. “Some universities have tried collaborating as we do with Brenau, but they haven’t been successful. I think egos may get in the way and one school or another wants to be in charge, and the collaboration fails.”

The teamwork between the two universities has produced an ever-increasing number of GTA alumni with many returning to Hall County to offer their expertise in productions and master classes. In 1990, 27 theater majors were enrolled at UNG. This fall, the number was 225.

“Our graduates have created an impressive professional network, communicating opportunities to each other in cities from New York to L.A.,” said Gay Hammond, associate professor of theater at Brenau. “We have a cadre of graduates like Harvard and Stanford does with law school graduates. GTA on your resume opens doors.”

The creation of GTA in 1979 required innovation to solve a couple of problems. Fortunately, two individuals and their institutions, Ed Cabell at UNG and Mary Jean Simmons at Brenau, were willing to collaborate and lead faculty and their colleges in the development of an ingenious plan.

UNG students could complete their associate degree at the Gainesville Campus (at the time, the campus did not offer bachelor’s degree programs) and transfer to the bachelor’s program at Brenau in one seamless motion. Brenau would receive an influx of students to bolster its program, and both institutions increased their faculty, staff and course offerings. 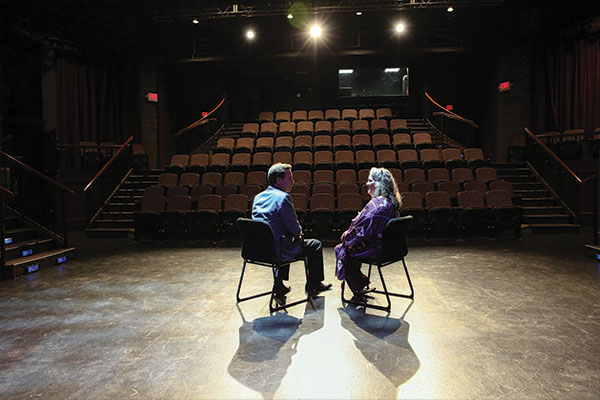 Jim Hammond is the artistic and managing director of GTA. Gay Hammond is the director of WonderQuest, GTA’s Theatre for Young Audiences.
“When Gainesville and Hall County built the Georgia Mountains Center and its theater was offered to us as our primary venue, it all began to take shape,” Cabell said.

Gay Hammond, who was a Breanu student pursuing a degree in theater, applauded the partnership.

“I was thrilled, because Brenau’s program was small and at a women’s college. So we were dependent on the community for men,” she said. “Once we merged, we took our work to the next level.”

Gay and Jim were in both of GTA’s first two shows, and had no idea they would help bolster the programs at their alma maters years later.

After 10 successful years, GTA took another step when it entered the American College Theater Festival, the pinnacle of collegiate theatre. GTA competed against 695 universities over three rounds. GTA’s production of “The Scarlet Pimpernel” was one of the top five picked to perform in the Kennedy Center in Washington, D.C.

After the win Cabell retired and more than 130 applied for the job. Jim Hammond, who studied with Cabell during his senior year at Brenau, threw his name in the ring. After building theater programs at Gordon College and Georgia College and State University, Jim accepted the director position to succeed his inspiring mentor in 1990.

“I watched Ed Cabell and how he found such joy in the work,” Jim said, noting he had an epiphany at that moment. “It was that magnetic moment when all of the elements of one’s life snap together and you think, ‘Oh, my God. I want to do that.’”

Jim took the reins of the program and founded the GTA Touring Repertory Company, expanded the season to five productions and continued to build on the successful formula Cabell had created.

Three years later, Gay Hammond became the leader of the Gainesville Children’s Theatre, which also was founded by Cabell. As a mother of two at the time, she was the ideal candidate.

Cabell said he couldn’t have chosen anyone better than Jim and Gay.

“Looking back I think I always knew that if GTA was to survive, it would have to be led after me by individuals who understood and valued what it provided for the students and the community. And who better than products of the program?” he said.

In 2000, the spotlight shone once again on GTA. The American Council on Education (ACE) recognized the program for its academic excellence and cost management. Only five programs in the country received the ACE award.

Jim Hammond explained the partnership allows UNG and Brenau to split the production and classroom expenses. The work of GTA is also supported by the community with $250,000 annually in ticket revenue and a $500,000 endowment.

In 2002, GTA experienced another influx followed by a praiseworthy accomplishment. The Gainesville Children’s Theatre, now called WonderQuest, officially became a part of collaboration. Six years later, WonderQuest won the Sara Spencer Award for Excellence in Child Drama, a regional award given by the Southeastern Theatre Conference. 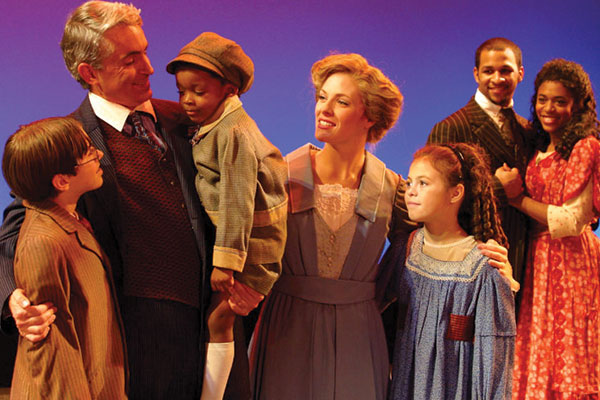 In 2003, GTA produced the Broadway musical “Ragtime,” with two actors from the national tour hired to perform with students.
In 2003, when GTA produced the Broadway musical “Ragtime,” the stars were aligned in the program’s favor. The national tour of “Ragtime” had completed its run and planned to take a six-month hiatus. GTA negotiated a deal through its graduates who were working on the national tour to use and store its sets and 350 Broadway costumes for a reduced price, while producing the show to open the new Hosch Theatre at Brenau.

The choreographer and actors who played Coalhouse Walker Jr. and Father from the national tour were also hired to play the same parts in GTA’s production.

In 2004, GTA received another award for its excellence from the Georgia Council of the Arts.

“We received the highest score of any theater in Georgia, and the highest ranking of any arts organization,” Jim said. “And that was right on the heels of ‘Ragtime.’”

In 2007, GTA reached new heights on the technical side with a production of “Metamorphoses” utilizing an 8,000-gallon pool with underwater tunnels constructed in the Ed Cabell Theatre. That same year, a switch to online ticket sales and discounted ticket packages was a game-changer.

“We had about 1,200 ticket package holders then,” said Joslyn Hilliard, GTA’s director of business and audience services. “This year, we have already sold 6,048 season tickets. Approximately 25,000 people see the work of our theater each year.”

In 2010, GTA added the Bachelor of Fine Arts degree in technical theater and design at UNG to increase offerings for students. At the same time, faculty and staff realized GTA was struggling with a space to create their wonderful productions. They needed design laboratories for lights and sound, and a new scene shop. So they sought the community’s help.

“We turned to the community and raised $2.5 million to build a new wing onto the Continuing Education and Performing Arts Building,” Jim said.

GTA reached new heights on the technical side with a production of “Metamorphoses” utilizing an 8,000-gallon pool with underwater tunnels constructed in the Ed Cabell Theatre in Oakwood, Georgia.

Each time GTA has lifted its game, the community has reciprocated. In the past 10 years, most performances have sold out. In November 2018, “The Wizard of Oz” had sold out shows with a waiting list of people in the lobby hoping to get in. Five months later, the entire run of the spring musical “Cabaret” was sold out two months in advance. GTA added performances, and tickets were bought immediately.

Because of the high demand, more community members are purchasing ticket packages to ensure they have reserved seats for the plays and musicals for GTA’s 40th season.

“They are going to two or more shows,” Hilliard said.

Of course, each year GTA aims to produce shows that appeal to the tastes of all its audience members. This year is no different. Two coming-of-age musicals, the reinterpretation of two classic tales and the premiere of a new play are part of the 40th season. The children’s tale “The Ugly Duckling” launched the season this fall. Gay penned the new script based on Hans Christian Andersen’s classic to last for 55 minutes to cater to the WonderQuest audience of young children.

The first mainstage production set for early November will be “Legally Blonde: The Musical,” which is based on the 2001 hit movie.

“It is one of the hottest properties from Broadway and a real crowd favorite,” Jim Hammond said. 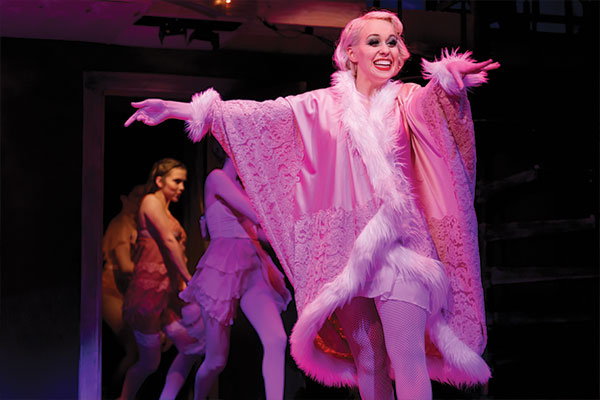 AS GTA continues to produce professional shows, plays and musicals such as “Cabaret” sell out in advance.
For GTA’s February Festival of Theater, GTA will present two shows. Jim’s favorite musical “Pippin” will run in Hosch Theatre at Brenau while Gay’s original play “The Bra and Panty Club” will be shown in the Ed Cabell Theater at UNG’s Gainesville Campus.

Wrapping up the season will be “The Arabian Nights” by Mary Zimmerman, who is known in GTA circles for “Metamorphoses” and “The Secret in the Wings.” Keri McClain, GTA marketing manager, said tickets are selling faster than any other show this season.

“It’s in the Cabell Theatre on the Gainesville Campus, which is a smaller venue. So people should buy these tickets sooner,” she said.