Editor’s Note: This is the first in a series of blog posts in which UNG faculty will report on their experiences teaching abroad.

Darth Vader’s theme (“Imperial March”) lies among countless musical examples that I use to teach how harmony and other structures in music can convey meaning. With its dramatic shift from a minor triad down a major third to another minor triad — harmony that John Williams likely “borrowed” from Wagner’s Tarnhelm motive — the ominous theme has served a pervasive role in American pop culture for the past 40 years. That is why I was a little surprised when I referenced Star Wars in a class that I was teaching in China and received only blank stares.

In May 2015, I taught a course at the University of Liaocheng, in the northeastern Shandong province, nearly 300 miles south of Beijing and 600 miles northeast of Shanghai. Relatively rural and non-traditional for China, the city of Liaocheng still has 600,000 people (more than Atlanta), with the greater Liaocheng prefecture at 6 million. I had planned my course as a music appreciation course, one that would touch on developments in music without going into too much technical or philosophical depth. Shortly after I arrived in China, however, I was excited to learn that my students would be upper-level music majors! That meant that I could delve into deeper material, with students being at least a little familiar with the repertoire and able to read some music — an important first step toward music analysis.

I was also told that the students spoke some English. I was perhaps overly optimistic about this claim. When first I walked into the School of Music, I was greeted by a music major. “Michael” — his chosen English name — spoke practically no English, which I feared would be typical of the students in the class. My Chinese college students had studied English for the past 10 years, but they were taught primarily to translate writing using what seemed to me like 1940s vocabulary and a grammar that I’m guessing their English teachers probably didn’t understand. Spoken English, it appears, is not emphasized in their curriculum. Fortunately, “Hunter” was assigned to be my class translator. His English was excellent. As an education major with little experience in music, he was perhaps challenged more by translating my specialized music theory terms into something that he could understand and then communicate to the class. 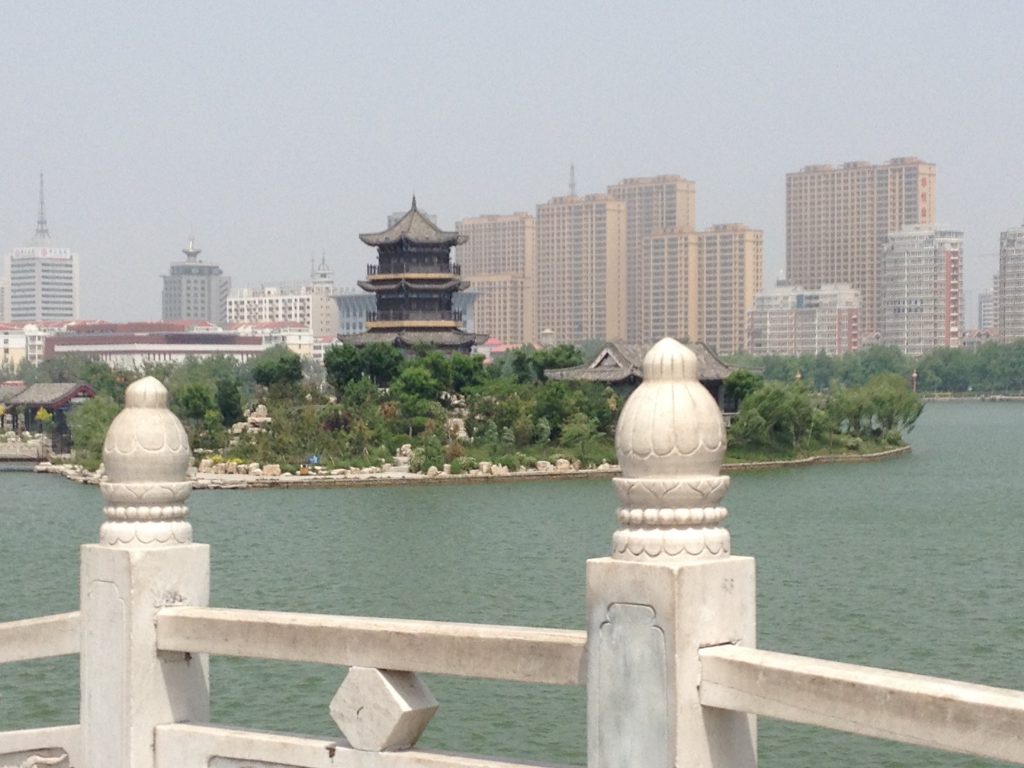 Hunter and I would prepare lectures most evenings. I thought about how Hunter responded to my questions. I’d ask a question, and he’d reply with something like a short, descending “Hm,” the way we might shrug and mean “not really.” But I learned that it’s more of an “ng” sound, which means “yes.” I also perceived that many Chinese prefer to respond with a polite “maybe” over a decisive “no,” something I have observed in other cultures.

My courses generally involve lots of listening, and I regularly turn to online resources like YouTube for showing musical scores while listening to recordings. I knew that online access would be very limited in the classroom, as it is throughout China: no YouTube, no Facebook, no Google anything (no Google Translate, no Google Maps), no Hulu, no Netflix. The first three were blocked by the Chinese government as “inappropriate.” So, I prepared music, videos, and PDFs on my laptop to take into class on a thumb drive. However, I found that the classroom computer could open neither PDFs nor Word files that were created after 2003. Challenges continued to increase. All the characters on the computer were in Chinese, of course, as was everything else, but I managed to navigate based on the icons. At least the room was equipped with a basic piano, which has a universal keyboard.

My first lecture on May 11 was an exhausting three hours, but it went well. I started with basic concepts (like keys, meter, and solfège) and found that most students seemed to understand, even if the English terms were new to them. So, I quickly started getting into much deeper concepts: What are the goals of harmonic analysis? How does analysis clarify meaning? The highlight, at least for me, was introducing a large-scale tonal problem between C minor and A-flat major at the start of Chopin’s Piano Prelude (op. 28, no. 20) and then revealing the deeper resolution of the conflict at the end. I sensed a few light bulbs going on among the stronger students, but it may have been too much for many. Several students asked questions after class, but only one subject was musical: How to count asymmetrical meter (like in 5 or 7) — something I did in class when I introduced meter. Other questions were more personal or cultural: How old am I? One student guessed “20.” A professor sitting in on my class was closer with “40.” And, “do American students wear glasses?” I observed that a higher percentage of Chinese students wore glasses than American students, but none wore sunglasses. Later, when Hunter saw me put on sunglasses outside, he said they made me look like a spy. He also said that I looked like an eagle with my “beak” nose. I laughed and appreciated his insight. I often think about that when I see the eagle icon representative of the United States.

Chinese students are not used to professors engaging directly and personally with them in class, but that’s my style. My dynamic, “American” pedagogy is part of what I think the University wanted its students to experience. Most students seemed quite shy. I thought maybe they didn’t want to embarrass themselves or disappoint me with wrong answers, but Hunter later said it’s more likely that they didn’t want to “show off” in front of their peers. Maybe their culture pushes toward the middle from both sides.

I used a variety of examples to demonstrate how meaning can be expressed in musical structure. They were fine with traditional examples, like Schumann’s “Träumerei,” but several asked me after class about Pink Floyd’s “Comfortably Numb,” which they loved and had never heard. While classical music is the core of what I teach, I constantly draw from a variety of genres. After discussing the music of J.S. Bach, his son J.C. Bach, Haydn, and Mozart in one class, I played some American folk and blues by request. Doc Watson, Alison Kraus, and Union Station quickly became class favorites. When I described how some gospel music originated as slave songs, we started talking about race relations in the U.S. That led us into a discussion about rap and hip hop, starting with Grandmaster Flash’s “The Message.”

Despite the obstacle of language, students continued to be engaged in lectures. I was a little disturbed when I saw some with their heads in their cell phones, but Hunter later suggested that they 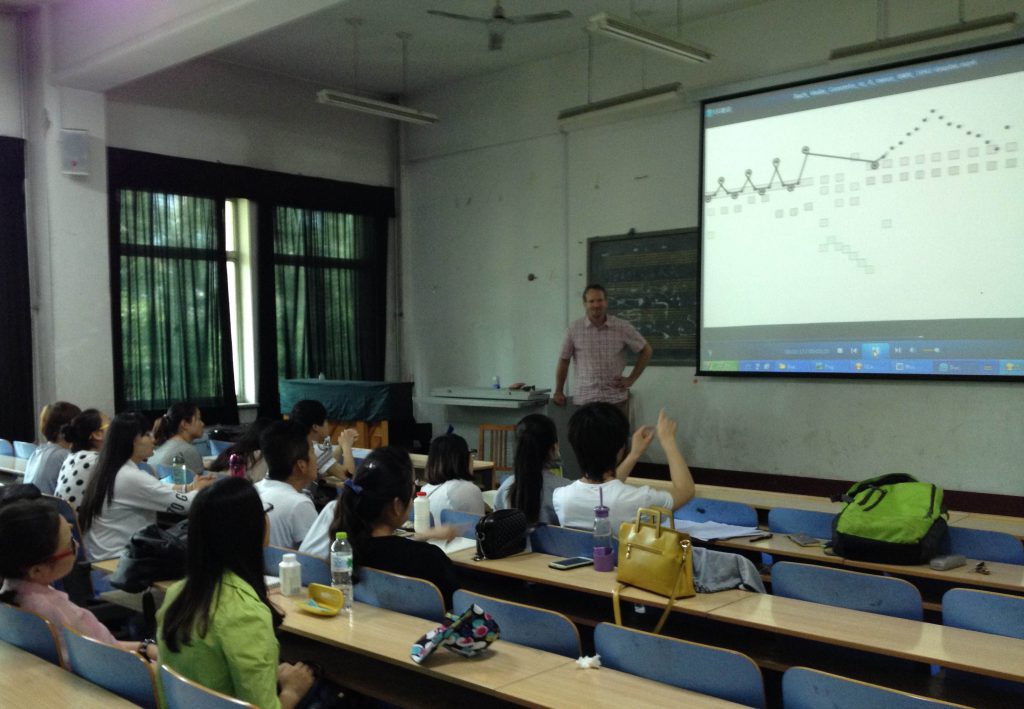 may have been looking at language dictionaries. They applauded after I showed a graphic animation that visualizes Bach’s Violin Concerto in A minor. The picture here shows “Michael,” a “harmony major” who wants to be a composer, commenting on the graphic representation of counterpoint and texture. He and “Max” — the girl next to him — asked me about religion after class. Michael is the only Chinese Christian I met. Max is mostly Buddhist, from what I understand, but religion is not a central part of the culture.

By the end of class, we had observed a similarity between sonata form and 12-bar blues: the apparent strict musical form and structure (tradition) in each genre provides basis for art and expression (innovation). In the Classical music form, two themes often contrast each other, yet as complements of each other they are joined in underlying unity. I proposed an analogy between Theme 2 and Theme 1 in sonata form and the ancient Confucian yīn and yáng. I was surprised to find that no students seemed familiar with the terms yīn and yáng, except for possibly having heard them “in the movies sometimes.” I think American college students might be more familiar with those terms. I might have had better success making analogies to Hegel’s dialectic (thesis-antithesis-synthesis). I continually appreciate having my assumptions corrected. I knew before my trip that there were no fortune cookies or General Tso’s Chicken in China, for example, but the absence of yin-yang surprised me. As did the absence of tea filters. Tea comes only in whole leaves, so there is no need for a filter. Also, plain boiled water is what most students drink and what many restaurants serve, even though tea is plentiful and (to me) inexpensive.

During the last day of class, I was amused to be pulled into the hall and given my remaining salary in an envelope full of cash (150 ¥100 bills, around $2000). In the last hour of class, we did our final exam. As with my previous tests, I told students that it had to be in English. They could use their translators (and notes!) but not their neighbors. Apparently, Chinese students do not view using other students’ work as “cheating.” I saw them in class collaborating and found strikingly similar answers on the test in the same odd “Chinglish,” like the term “display department” used to describe a part of sonata form (perhaps to mean exposition).

In the end, I wondered if the University of Liaocheng had intended my course to be more an exposure to English language and Western culture using the vehicle of musical topics than a course on music analysis itself. Even if students did not get my Star Wars reference, which I quickly dismissed (“Well, it’s a popular movie in the U.S.”), they were eager to learn about pop, rock, folk, blues, and other American music, which they rarely encounter. I like to think that these students gained from my course an increased awareness of how music can express meaning beyond the text across many genres — at least as much as I gained an increased awareness of human commonality (despite governmental limitations) across the world. 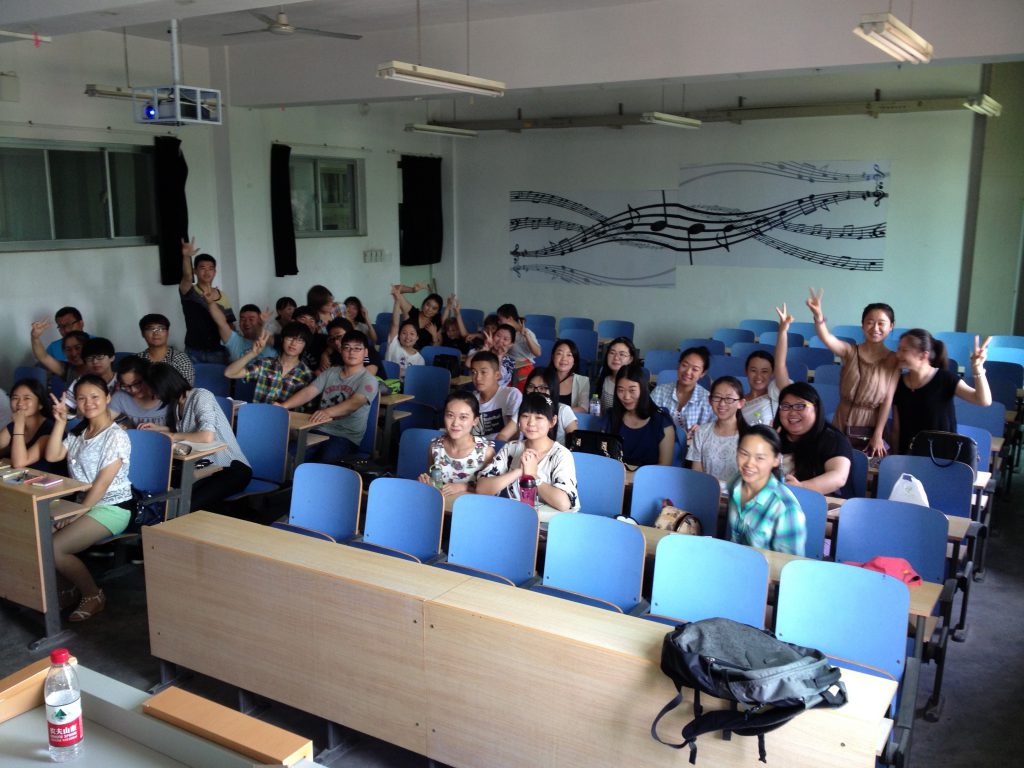