Skip to content
Bio
Beth Brownlee
is a 1979 graduate of UNG.

A motivational speaker and cancer survivor, she has found that sharing inspiration and stories of hope are an incomparable way to give.

As co-founder of Trust Your Journey, an online company offering ecofriendly women’s apparel, jewelry and accessories, Brownlee’s vision is that her message and website will inspire people to be grateful for what they have and mindful of what they can become.

Where did you pick up the passion for athletics?

By all respects, I was a tomboy as a child. I grew up in Tucker, Georgia, with my younger sister and older brother. I was very close with my brother. When there was a football game in the yard and the kids lined up to be picked for the teams, my brother always picked me first. It was my brother who pushed me to bat left handed, even though I was right handed, which I believe made me an even better player than I would have been otherwise.

Throughout high school and college, I played softball, basketball and participated in track & field. In college, I was offered a basketball scholarship in my third year and went on to major in physical education.

Where did life take you after you graduated from UNG?

After college, I taught high school and coached gymnastics and basketball. In 1982, I left teaching to take a sales position at The Athlete’s Foot. I then became a sales rep for Reebok in 1985, with similar positions at Avia and Hind Apparel. I jumped into sales management at Asics in 1995.

In 1998, I landed at Columbia Sportswear, where I worked for eight years. I was a regional sales manager over Footwear and Apparel, and my career was heading upward. In 2004, I was promoted to director of U.S. Sales Apparel, and I just knew this was the pinnacle of my career.

What was the turning point?

Being diagnosed with breast cancer later in 2004 was a turning point in my life to say the least. Not only was I scared to death, I began to evaluate all that was important in my life. I was so sick but determined to make it. I knew from the beginning that I would not let cancer get me but I suppose there was always a lingering doubt, an uncertainty of what life would bring that hung heavy on my heart.

One day during my treatment, a friend gave me a small token gift with the three words, Trust Your Journey inscribed on it. That was it. It all made sense and brought such comfort and peace to me. I had to believe and trust that this awful cancer would lead to good – someday, somehow.

As my health has returned, the next step of my life was to share Trust Your Journey with all women. I felt such motivation and excitement at the thought of helping women around the world. Whether the challenge they face is big or small, Trust Your Journey has the ability to resonate, inspire and comfort. After 10 wonderful years developing Trust Your Journey, every day brings new inspiration from those lives we have touched. 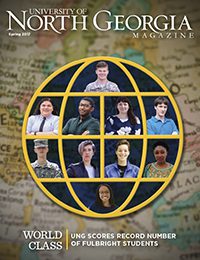